Brady Anderson Was Not Alone

Share All sharing options for: Brady Anderson Was Not Alone

Last week, the folks over at Baseball-Reference released a new feature for the Play Index that I've wanted for a long time—the ability to perform a search within a specific group of players. Basically, now you can perform a search, save it, and then run a new search just from the pool of players generated in the first search. Super cool.

This seemed like a perfect time to do a follow-up on Brady Anderson. I don't know why, but lately I've been feeling like Brady gets a bum rap for his career year. A few weeks ago, I attempted to find the defensive version of Brady Anderson. Today, I want to look at the worst career WAR Batting Run totals among players who had a 50 WAR Batting Run season. Brady Anderson fits this critieria since his 1996 season was worth 53 runs. And here they are: 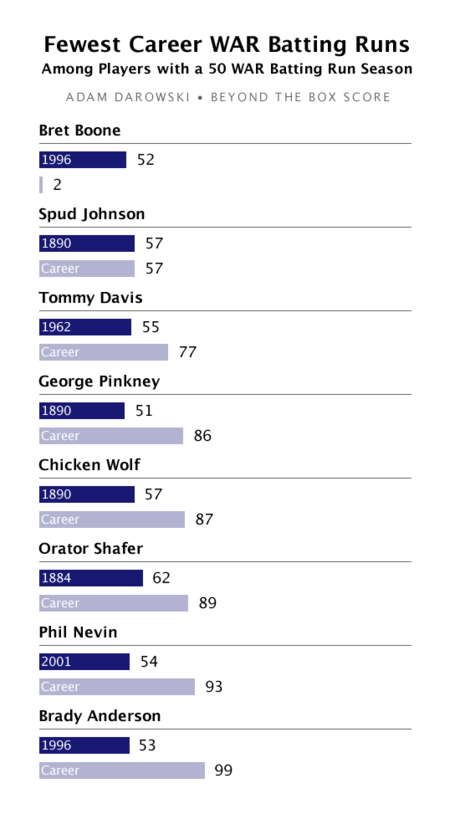 That's seven players in history who have produced a 50 batting run season, but have a lower career batting run total than Anderson. Interestingly, three of them (Johnson, Pinkney, and Wolf) came in 1890. Two of those seasons were in the American Association while one came in the National League. Orator Shafer—the only 60 run hitter on this list—also played in the 19th century.

That leaves four guys to discuss: Anderson, Bret Boone, Tommy Davis, and Phil Nevin. We've all heard steroid whispers about Bret Boone and Brady Anderson. But I haven't heard anything about Phil Nevin or Tommy Davis being accused of performance enhancing drugs. And they both had the same outlandish peak that Anderson and Boone displayed.

Here's how the careers of these four players (in batting runs) look: 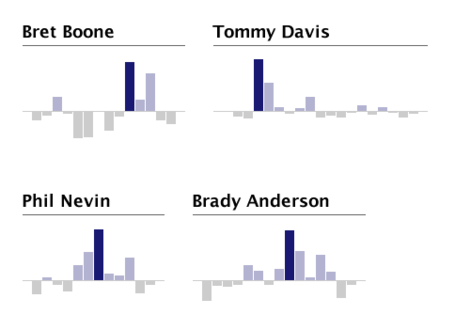 Another way of looking at this is listing each player's top five seasons, by batting runs:

I'd actually call Anderson the least suspicious of the four. He was good for the longest stretch.

What I'm trying to say here is... the reason Brady Anderson is pointed at so often as a poster boy for steroids is that in 1996 his 50 batting runs season happened to manifest itself as a 50-homer season. If he was worth the same, but instead hit 38 or so homers and more doubles and walks, nobody would say anything. But the fact that he hit that big round 50 makes all the difference.

Brady Anderson was not alone.