Share All sharing options for: The Best Short Position Players of All-Time 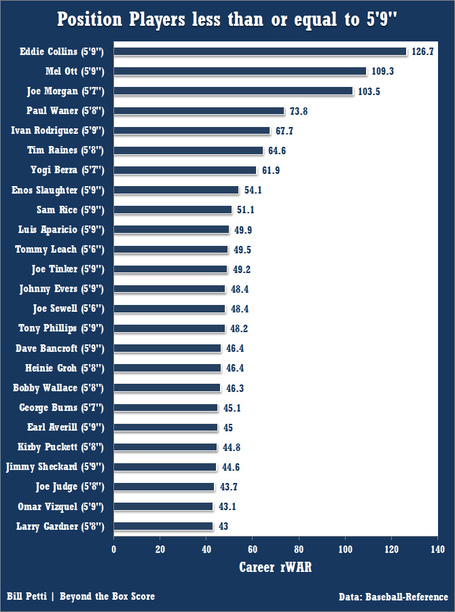 Red Sox second baseman Dustin Pedrioa is pretty short. Generously listed at 5'9", Pedrioa has managed to be not just a serviceable major league player, but one of the very best in the game. His official height places him among the shortest position players in the game today (9th shortest among players with >=300 PA's last year), but he's done a lot of damage.

In just five seasons, Pedrioa has accumulated 17.8 rWAR (fourth most among second basemen). That was good for 7th best among all players <=72 inches tall and the most for any position player <=70 inches tall.

While Pedrioa's 17.8 rWAR is impressive, there have been far greater position players who stood no taller than 5'9".

Eddie Collins tops the list with 126.7 rWAR. But as impressive as Collins was, there is another second baseman that really stands out for me: Joe Morgan.

Morgan stood only 5'7", making him easily the most productive player at that height in history. Yogi Berra stood 5'7" and came in second to Morgan at that height with 61.9 rWAR. Morgan didn't just accumulate his value through his defense--the man could hit.

Morgan is absolutely maddening as a baseball analyst, but the man was one of the best all-around position players the game has ever seen. And he was arguably the best "short" position player to play the game.