Have the Indians been lucky, good, or a little of both so far?

Share All sharing options for: Have the Indians been lucky, good, or a little of both so far? 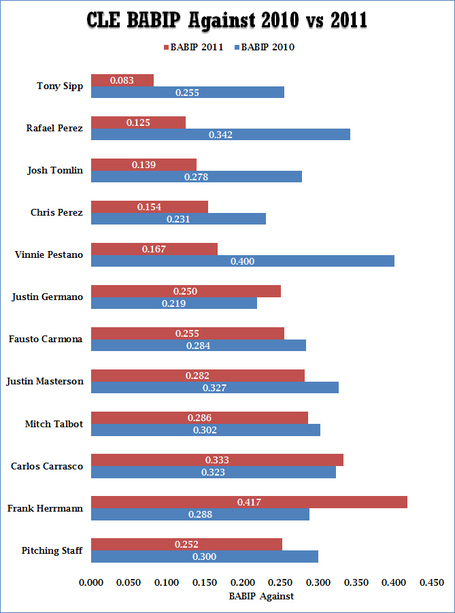 Cleveland's start has them ranked 9th in ESPN's Power Rankings, but only 19th in our rankings here at Beyond the Box Score. So what gives? Are the Indians for real? Or is their fast start driven more by the randomness and luck of the small sample size of the first two weeks of the season?

So far, Cleveland's offense has only batted .296 on balls in play (vs. .293 last year), so it's not as if the ball is bouncing there way an inordinate amount. Their hitters are getting on base at a high rate (.329, 4th highest OBP in the AL) and, so far, they are capitalizing on their opportunities (18% of base runners scored, 4th highest in AL). And all of this has happened despite Shin-Soo Choo (arguably the most underrated position player in the bigs) crawling out of the gate (.523 OPS). So, yes, part of Cleveland's offensive success has come from guys like Asdrubal Cabrera knocking four home runs in the first two weeks, but these performances are seemingly balancing out the lack of production from a guy like Choo.

So if the offense is arguably legit, what about the pitching/defense?

Their low hit rate is the result of a very low BABIP against of .252 (4th lowest in the AL), almost .50 points lower than their staff managed last year. BABIP can indicate luck or it can indicate a staff that is better at inducing, for example, less line drives.

Here's a look at 10 Cleveland pitchers and their LD rates from last year versus this year (starters are in bold):

Four out of their five starting pitchers have lower LD%'s this year versus last year. Now, it could be that they have improved to the extent that their LD% is sustainable. Carmona was second among starters last year in this category, but his current 9.1% is likely not sustainable. Similarly, no starter in the bigs finished 2010 with a LD% below 13.6%. In fact, no starter (with the exception of Orlando Hernandez in 2007) with a minimum of 100 innings has finished the year with a LD% lower than 13.4% since 2003. That suggests that three of Cleveland's five starters are likely to start giving up more Line Drives and, with that, more hits as the season progresses.

I think it is safe to say that the Indians are generally playing well, with a bit of early season luck sprinkled in on the mound. That being said, with Shin-Soo Choo waiting to break out offensively, it's reasonable to think that this Indians team is legitimately better than last year's squad. How much better is hard to say less than two weeks in. I have to question how well their pitching will hold up over the course of the year as their HR/FB ratio and BABIP come back down to earth, but so far, so good.