Why Don't Pitchers Pound Ike Davis Inside More Than They Do?

Share All sharing options for: Why Don't Pitchers Pound Ike Davis Inside More Than They Do? 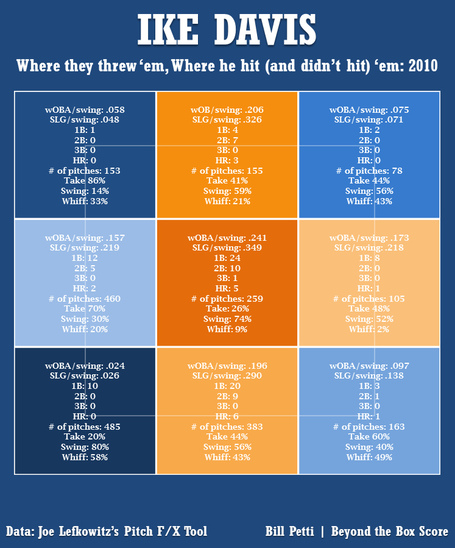 Ever since Ike Davis broke into the majors last year I've been intrigued by him for a number of reasons, not the least of which is that the Mets haven't produced a potential stud first basemen that contributed to the team since Dave Magadan. Davis showed great plate discipline last year, posting an OBP of .351, while displaying significant power with 19 home runs and 33 doubles.

What's interesting to me is that despite Davis' promise and solid start he appears to have a natural hole in his swing.

Davis is 6'4" and stands with his hands quite high, but as he loads his hands as he strides to the ball he drops them quite low and drags his bat to contact. Now, Davis isn't the first hitter to have a long swing. But given the severity of how low he drops his hands I've imagined that, over time, pitchers would adjust by challenging Ike with inside fastballs, belt to letter high in the zone.

If you look at how pitchers have approached Davis, however, they haven't seemed to adopt that strategy.

The visual above represents the distribution of pitches seen by Davis in 2010 by location, as well as what he did with those pitches. I downloaded Davis' pitch f/x data from Joe Lefkowitz's site and coded each pitch into nine categories: Low and Outside, Low Middle, Low and Inside, Middle Away, Middle, Middle In, High and Outside, High Middle, and High and Inside. I then calculated wOBA and SLG per swing* for each location. Each cell on the visual is color coded to represent how well Davis fared against pitches there: dark orange is the best, dark blue is the worst. The faded box in the middle represents the strike zone.

The initial takeaway: Pitchers generally have the right approach to Davis, pounding him with pitches away, but they appear to be missing an opportunity to exploit Davis' troubles with inside pitches.**

Where pitchers tended to throw Davis the most, however, was away.

The largest percentage of pitches thrown to Davis tend to be low and away, and with good reason. Davis swings at these pitchs 80% of the time and misses on 58% of those swings. Moreover, when he does make contact he does little damage. On low and away pitches, Davis only managed 10 singles--a wOBA/swing of .024 and a SLG/swing of .026.

Davis has similar trouble with high and outside pitches. Of the 153 he saw in 2010, Davis only managed one single for a wOBA/swing of .058. However, Davis only offered at 14% of these pitches.

As bad as low and away and low and inside was for Davis, there was another location where he struggled: high and inside.

As suspected, given how he drops his hands and drags the bat through the zone, Davis does little damage on pitches up and in. Of the 78 pitches thrown there, Davis managed only two singles for a .075 wOBA/swing and .071 SLG/swing. More importantly, Davis swung at 56% of those pitches and missed on 43% of those swings.

Given that Davis offers at over half of pitches high and inside and misses almost half the time, why haven't pitchers tried to tie Davis up more up and in? With the mechanics of his swing, his 56% swing rate in that location, and lack of damage he does on contact there, I would think he'd see more of those pitches than he has.

It will be interesting to see if pitchers adjust to this hole this season and what Davis does in return. Will he continue to swing at a high rate with little return? Or will be lay off those pitches at a higher rate, waiting for a belt-high inside pitch, which he tends to handle better?

So far, at least, they are continuing to avoid this location. As a Mets fan, I'm all for this. As a baseball analyst, it's quite puzzling.

*I did not include balls in wOBA as it skewed the results quite a bit. For example, it would be impossible for Davis to take a pitch down the middle and have it be called a ball. Including balls and counting them as a walk biased other locations, so I just went with singles, doubles, triples, and home runs. Here's the equation I used: wOBA per pitch = ((1B*.89)+(2B*1.27)+(3B*1.61)+(HR*2.07)+.320)/(Swinging Strikes+Hits+Fouls).

**The analysis does not take into account pitch type or sequence. My first pass suggests this wouldn't change the initial conclusions much, but there's no reason not to flesh out the analysis with these two variables.