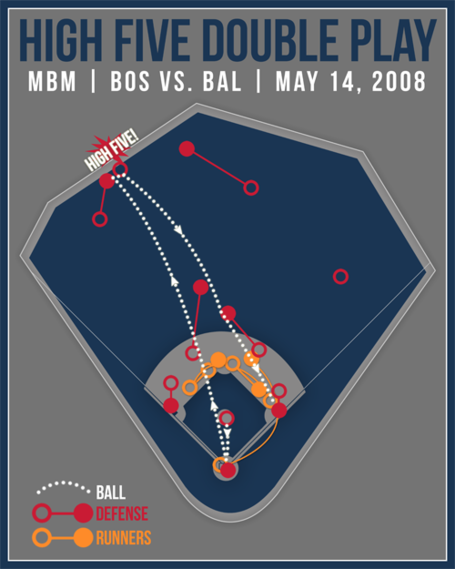 With two on and one down, Ramirez's former teammate, Kevin Millar, slammed a ball to left-center that appeared destined to carry over Ramirez's head. On a full sprint and fully extended, Ramirez chased it down just before he hit the warning track for the second out.

"I thought I was not going to have any chance to throw the guy out at first, but I did it anyway," Ramirez said. "I just got a bad jump, but I never give up. I go there and I caught it."

What happened next made it even more special.

In two strides, Ramirez was at the seven-foot wall. He propelled himself up the green, cushioned wall with his right foot and high-fived a fan -- one wearing a Red Sox T-shirt, no less -- before getting back to business. Using his momentum, which was now pushing him toward the field, Ramirez spotted second baseman Dustin Pedroia in short left field and saw Aubrey Huff, who had singled, desperately trying to scamper around second base and get back to first.

I'm sure you'll read many different versions of the impact of "Manny Bein' Manny"'s retirement, his drug suspension(s), his use of HCG (pregnancy hormone!), his many funny and stupid and awesome and wonderful and awful things he's said and done, most of which will certainly be delivered with the "yeah, but" caveat.

There's no "yeah, but" to this, though. MBM, in one of the most memorable and fun plays in baseball history, took the briefest of moments to give a Red Sox fan in a visiting stadium a high five -- in the middle of turning a double play (unofficial angle).

Forget everything else you know, forget the steroids, the horrible defense, the questionable sportsmanship / teamsmanship, forget that pestering question in the back of your mind of why he's treated so differently than Bonds despite actually being caught juicing twice (it's not race!), forget the lingering questions and implications of what his early retirement will do to his legacy, and how we're going to ever make it through this silly era with our wits about us. Forget all that, if only for a moment.

Now that was a beautiful play.