The Future of the Hall of wWAR

Share All sharing options for: The Future of the Hall of wWAR 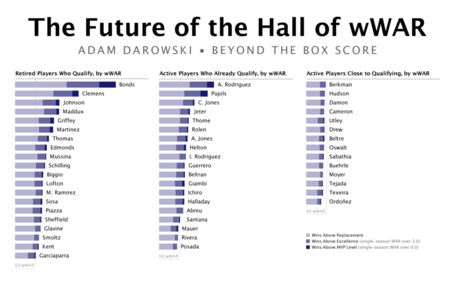 When I wrote my individual posts about the Hall of wWAR inductees, I included a section called "Who's Next?". This section mentioned the active and retired-but-not-yet-eligible players who already cleared the Hall of wWAR baselines I used for induction. So, while they weren't yet eligible for the Hall, I knew for certain that they would be added to the Hall of wWAR when eligible. (Gosh, objectivity makes this simple.)

The first two columns of the graphic above present the players included in the "Who's Next" sections. The vertical "69 wWAR" line represents the basic baseline I used for induction. You'll notice in the second column, three players don't reach that threshold. There is a lower baseline for catchers and relief pitchers (and subsequently a higher baseline for first basemen, left fielders, and right fielders).

What I want to focus on today is that third column—the guys who are active and haven't quite met the threshold, but have a chance. How far away is each of them from qualifying for the Hall of wWAR?

Tim Hudson: Hudson, a pitcher I once considered an absolute lock for Cooperstown, sits at 46.3/15.3/1.3=62.9 wWAR. As a starting pitcher, he needs 69 wWAR for induction. Coming off a 5.3 WAR season at age 34, Hudson's chances seem good. A 4-win season at age 35 and a 2-win season at age 36 would put him in. Basically, just a combination of 6.1 WAR over the next few years will get him in. Not bad considering the rough start to his 30s and the fact that he had Tommy John surgery. Personally, I hope he blows past the baseline.

Mike Cameron: Like Damon, it is likely too late for Mike Cameron. Still, it's impressive how close he's gotten. Now in his age 38 season, he sits at 47.4/13.4/0.4=61.2 wWAR (tied with Damon). Also like Damon, Cameron isn't subject to the higher baseline a corner outfielder would need to reach. But again, 8 WAR seems a stretch at this point.

J.D. Drew: Now in his age 35 season, time is running out for Drew. He currently sits at 46.8/12/1.5=60.3 wWAR and is subject to the higher baseline for corner outfielders. He needs 17.7 wWAR. His WAR totals for his last four seasons are 2.7, 2.7, 5.6, and 2.5. I think 2-2.5 WAR is his current true talent level. It would take him over seven seasons at that rate. Seeing that Drew has not even committed to playing next season, I'm guessing he finishes on the outside.

Roy Oswalt: Like Hudson, I used to believe Oswalt would coast to the Hall. I still believe he's Hall-worthy, all though there's certainly some debate about it. He current is in his age 33 season and sits at 44.6/14.6/0.2=59.4 wWAR. So, he's in the home stretch, needing just 9.6 wWAR. He was worth 5.1 WAR last year, so two more years at that level would blow him by the baseline. Really, in his age 33 and 34 seasons he just needs to average 3.9 WAR to make it. Alternately, he could hang around for four more years at 2.4 WAR per season and get in. Either way, I think he gets it.

Mark Buehrle: It's hard to believe Buehrle is just 32 years old this season. He's been a dark horse Hall of Famer for a long time and he just keeps getting closer. His 3.5 WAR last year was his lowest total since 2006, but the truth is Buehrle doesn't have far to go. He sits at 42.9/14.1/0.0=57.0 wWAR, needing just 12 to reach the minimum. That's three 3.5 WAR seasons (which would put him at the end of his age 34 season). I don't know about you, his chances look pretty good to me.

Jamie Moyer: Moyer is 48 and currently rehabbing from Tommy John surgery (that sounds crazy to even say). He wants to play again, and I will never doubt Jamie Moyer. The problem is that he was under replacement level in 2010 and posted just 0.5 WAR in 2009. He is currently at 47.2/9.2/0.0=56.4 wWAR, meaning he needs 12.6 wWAR. That's just not going to happen at this point.

So, who will make it? I've got Lance Berkman, Tim Hudson, Chase Utley, Adrian Beltre, Roy Oswalt, CC Sabathia, Mark Buehrle, and Mark Teixeira making it. I don't think I've identified the only active players who will be Hall of Famers. I just covered players with 35 or more WAR heading into 2011. I think guys like Evan Longoria and Ryan Zimmerman are on the right track. But it's just waaaaaay too early.

For more on the Hall of wWAR, check out the visualization.