It never sat right with me (and most likely everyone else that spends their free time reading and writing about baseball) that there were no playoffs in 1994. The season had everything to offer for a 6 year old growing up just south of Chicago. I got to wear number 13 while playing shortstop in teeball. I was introduced to jalapeño peppers on a warm Saturday at Comiskey Park (much more enjoyable in retrospect than at the moment). Add in the fact that Frank Thomas was absolutely killing it. But as we all know, things fell apart. August 12th rolled around and the players didn't suit up. October was quiet and cold. We were mercifully saved from witnessing a sub-.500 team (Texas Rangers) make the playoffs, but we also unknowingly witnessed the beginning of the end of the Montreal Expos. They never got their fair chance despite being the best team in baseball.

The internet truly is a beautiful thing. While I currently lack the budget to download Diamond Mind, What If? Sports is free if one is willing to put the time and labor into their "research". I set up the playoff brackets as they would have been if the season continued on its merry way. I decided to take a sample size of running each series 50 times. I would have done more, but clicking through more than the 1,000+ times I did lacked true appeal. Each team used a 3-man rotation of their top three starters and used their most frequently used starting lineup. This being a simpler time, the team with the better record would obtain home field advantage in the World Series. The Wild Card was supposed to have debuted in 1994, and in our little bizarro world it will. The first round match-ups are the Los Angeles Dodgers (58-56) vs. the Montreal Expos (74-40), the Atlanta Braves (68-46) vs. the Cincinnati Reds (66-48), the Cleveland Indians (66-47) vs. the New York Yankees (70-43), and the Texas Rangers (52-62) vs. the Chicago White Sox (67-46).

Somehow the Championship Series wound up being division rivalry match-ups. Montreal would host Atlanta and Chicago would host Cleveland.

The Coolest World Series Ever?:

I don't believe I could ever possibly enjoy a World Series match-up more than this. Thank you internet, you are the best. Canada would enjoy its third consecutive World Series, though its first in Quebec. Unfortunately for me, it would not go well for my team.

This imaginary championship would have allowed ownership to keep the players. Jeffrey Loria never would have owned a major league franchise! Life would have been grand. It's nice to dream sometimes. 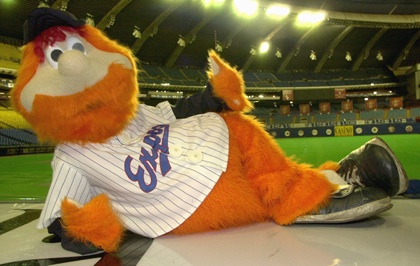