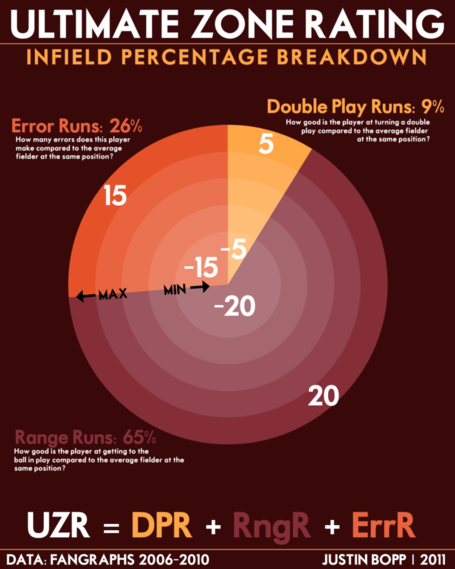 This is more of a graphic dump, an attempt to get this out of my system, than anything. I started almost two years ago trying to develop a better visual for defensive metrics, but many lessons since teach me that jacking around with data presentation that doesn't necessarily improve understanding is time wasted.

So, over time my goal changed from "change the world with a defensive visual!" to "show combined team defense" which eventually lead to the "TargetView," which I won't link back to for reasons of embarrassment. Basically, I really liked rainbow skittles colors. The design kinda worked but wasn't terribly useful.

Which brings us to today's visual, which is the last gasp of what I'll probably do with UZR for some time. What you're looking at is a data capture from all of 2006 to last fall, 2010. All players included have a minimum of 100 innings at the queried position, and positions were divided out between infield and outfield (forthcoming).

I then totaled the various components up and created a pie chart showing the general component percentage, and then attempted to create a scale to show the basic minimums and maximums for each. But honestly, the logic behind doing so now escapes me, other than originally thinking it would look pretty cool if I could remove non-reached sections for a specific player view. I'm really unhappy with the scale, but perhaps you guys might appreciate it more than I.

The result is somewhat revelatory in that it shows where infielders get the majority of their defensive value, and somewhat instructive for visual primer purposes--though I'm not certain either were accomplished terribly well.

Here's how this might be applied to a specific player: 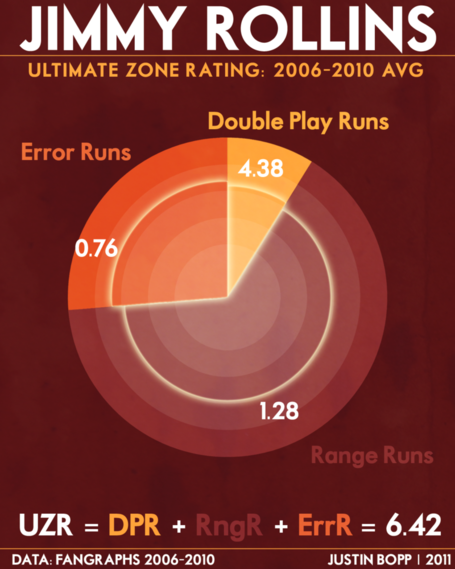 Like I said, I'm not sure how effective the scale is. I think I dislike it because it's just inelegant. Anyway, I'd love your feedback. Maybe we can turn this into something valuable with some insight that I'm overlooking.