Michael Bourn: Making the Most of His Opportunities

Share All sharing options for: Michael Bourn: Making the Most of His Opportunities 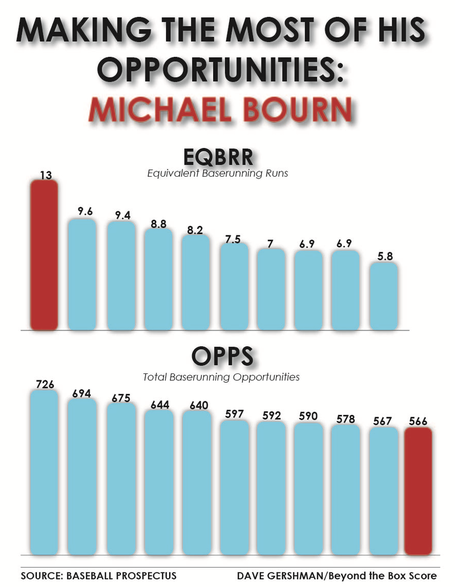 The Astros have had a rough past few years searching for talent. A lousy minor league system and the inability to develop talent properly have led to many trades of their so-called "stars." Arguably the best piece they got in return from one of Wade's blockbuster deals has been Michael Bourn.

Having been worth 4+ wins each of the last two seasons as well as being easily the best defensive outfielder in the NL, the 'Stros certainly have a cornerstone type of talent. What's really underrated is how much he helps the team on the bases.

Alas, being 11th in 2010 according to OPPS (at 566) and then leading in EQBRR displays the success of Bourn on the basepaths when the ball is put in play or when he advances 90 feet by himself. Of course, with a lnieup that didn't do much offensively in 2010, Bourn made the most of his opportunities while getting on base fewer times than several others, while leading by a big margin in EQBRR.