The Hall of wWAR: Third Basemen

Share All sharing options for: The Hall of wWAR: Third Basemen 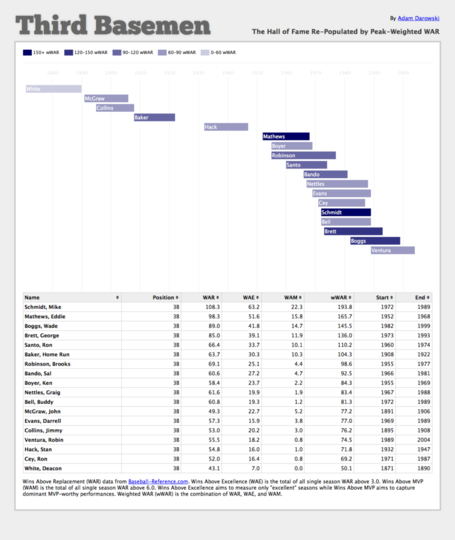 The most ridiculously under-populated position in the Hall of Fame is third base. Before Jeff Bagwell swung and missed, Ron Santo was an easy choice as the best eligible position player outside of the Hall. I did some research in the past that found the next-most-deserving third baseman was Sal Bando.

Bando was part of a large group of third basemen (many of whom played simultaneously) who provided a similar amount of value. Voters seemingly figured this entire class of third basemen wasn't good enough for the Hall of Fame. The fact that nobody stood out cost all of them.

One thing the voters did do right is not elect many early 20th century third basemen. For whatever reason, third basemen didn't start piling up value until the second half of the century. Because of this, we actually remove three of those ten third basemen they actually did put in.

These eleven players are not in the Hall of Fame, but are now being inducted to the Hall of wWAR: