The Hall of wWAR: Second Basemen

Share All sharing options for: The Hall of wWAR: Second Basemen 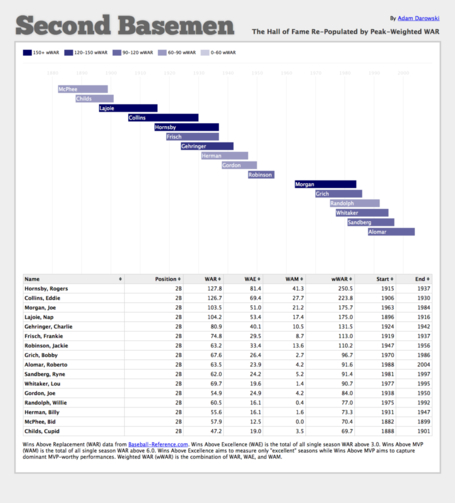 With Roberto Alomar's Hall of Fame selection, I've read more and more about how second basemen tend to break down sooner than other position players. I've listened to reasons that range from the wear and tear of double plays to the fact that second basemen are failed shortstops (and are therefore a lower class of athlete). Perhaps that is reflected in our Hall of wWAR adjustment, since just sixteen second basemen make it.

Six players were bumped, but among that crew only Bill Mazeroski stands out as an eyebrow-raiser. Four players were added back, and two of them rank among the very best players not enshrined in the Hall of Fame.

These four players are not in the Hall of Fame, but are now being inducted to the Hall of wWAR:

Up next? Third basemen. I promise a lot of turnover in that one!