Who Got the Scoop? Signing Scoops 2010 Offseason Final Tally

Share All sharing options for: Who Got the Scoop? Signing Scoops 2010 Offseason Final Tally 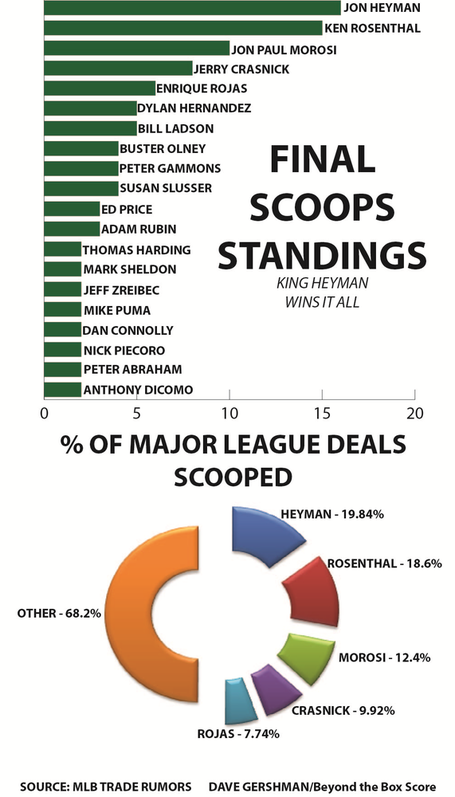 There were 124 Major League Deals signed during the 2010-11 off-season, and Jon Heyman was first to report 16 of them. A month or two ago, I ranked the top reporters based on scoops, and now, as the off-season is over, Jon Heyman is crowned King....

Of course, like many situations in life, quality beats quantity. Even though Peter Abraham is featured on the bottom half of this list, even though T.R. Sullivan isn't even on the list, the duo might be considered as reporting the two most important free agent deals this off-season. Abraham reported the Carl Crawford signing and Sullivan reported Cliff Lee's agreement with the Phillies. However, a scoop is a scoop -- and as I told Jon Heyman earlier, if you report a free agent deal, you're still doing your job. It's still as important if you report Chad Durbin signing with the Indians, even though the popularity factor might not be on the same level.

No one on the top 20 list above were wrong about a reported deal. Without using names, certain reporters (who aren't on this list) may have reported prematurely without being 100% accurate. However, it's often the case that a report may be confirmed with wording of a confirmation, only to see that the first to report accurately or inaccurately wasn't completely upfront or confident with their report. As for getting credit, MLB Trade Rumors makes sure they give the details as to how the reporter reported the deal. For example, they will be sure to say "Jon Heyman reported this on twitter" and not "Jon Heyman reported this."

There have been many questions as how these reporters are ranked. A reporter gets a "point" or a "scoop" after he is first to report a ML deal. Getting the news out there is most important in the reporting process -- even if it takes one reporter to report and another to confirm. Alas, you can't confirm a deal if there's no original report.

Back to the aforementioned scoop explanation, a scoop is a scoop no matter what. Here's why: T.R. Sullivan for example, who reported the Cliff Lee deal just so happens to be a writer for the Star Telegram -- A Texas oriented news source. Obviously, he has more Rangers sources than someone such as Clark Spencer, a Marlins beat writer. So if Spencer reports every Marlins deal, which consists of much less big time players than those that Rangers writers dealt with last off-season such as Cliff Lee, how can you knock Spencer? That's why these rankings are based on quantity.

Remember, these are only for Major League deals.

The original scoops article can be found here