The Hall of wWAR: First Basemen

Share All sharing options for: The Hall of wWAR: First Basemen 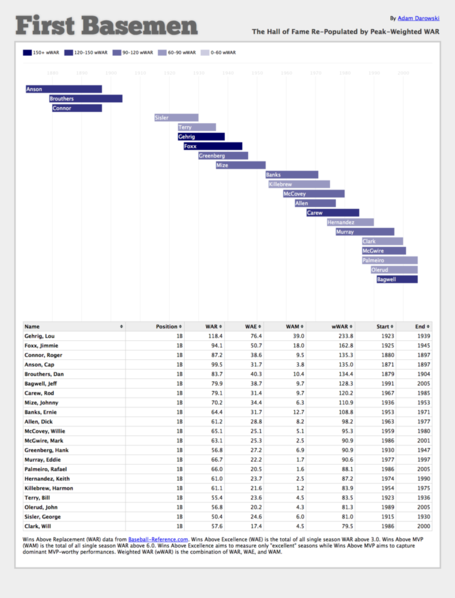 I was somewhat surprised to see that first base actually gained an inductee as a result of the Hall of wWAR re-population process. Six first basemen were bumped from the Hall, but really only two of them were questionable elections to start with—Jim Bottomley and George Kelly.

In their place, we welcome seven new first basemen. They are all modern players, with all but one starting their careers in the DH era. It is a very interesting group of players, as we have positive PED tests, cocaine scandals, and explosive personalities all represented here.

These seven players are not in the Hall of Fame, but are now being inducted to the Hall of wWAR:

These four players are either still active or retired and not yet eligible for the Hall, but have already met the threshold to be inducted to the Hall of wWAR:

Tune back in tomorrow as we start off by discussing second basemen.