The Hall of wWAR: Catchers

Share All sharing options for: The Hall of wWAR: Catchers 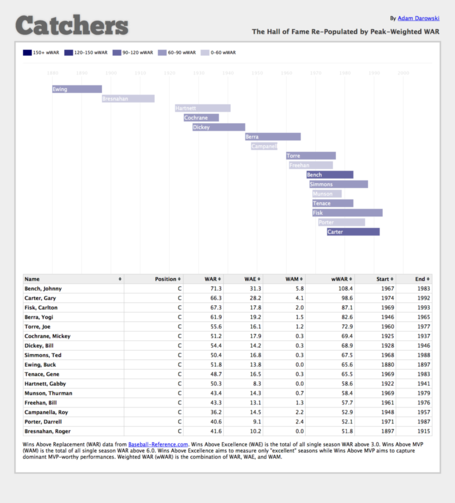 I originally got into baseball research because of my lifelong affection towards catchers. After looking at Lance Parrish's stats, I figured he should be a Hall of Famer. I started digging deeper, and though I no longer believe Parrish should be elected (turns out I had the wrong Tiger all along), in many ways the Hall of wWAR "completes" what I set out to do that very day.

Catchers, while not as criminally overlooked as third basemen, are under-represented in the Hall of Fame. I assumed this process would bump a few out while welcoming a pretty substantial new crew. I've had a half-dozen catchers I've felt strongly about for the Hall of Fame for quite some time (at least, since correcting my earlier Parrishian instincts). Today, I welcome a half dozen catchers into the Hall of wWAR, but one from my Original 6 (Wally Schang) didn't quite make the cut.

These six players are not in the Hall of Fame, but are now being inducted to the Hall of wWAR:

These four players are either still active or retired and not yet eligible for the Hall, but have already met the threshold to be inducted to the Hall of wWAR:

Up next, first basemen!