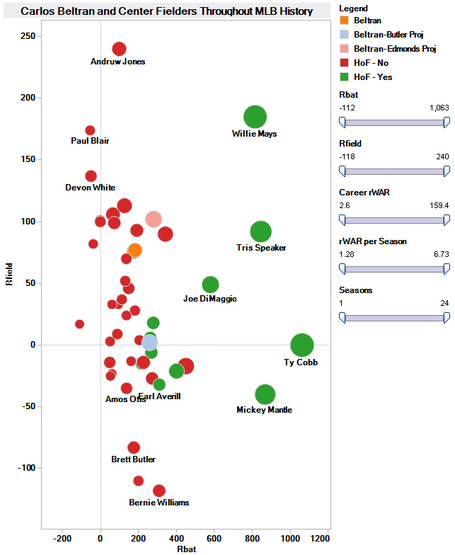 As Carlos Beltran's time with the Mets nears its end, lots of folks are starting to discuss his place in history. His career is far from over, but given his injuries over the past few seasons and his age (33), it's fair to say the inevitable decline is upon us. If you look at players who posted a rWAR >=25 and played greater than 70% of their games in center field in their career and then plot their career WAR Runs Batting and WAR Runs Fielding you get some perspective on where Beltran currently sits among the all time greats.

The image above is a screen shot of an interactive tool I put together (see below the fold--size of bubbles equals career rWAR). Beltran is in a pretty good position heading into his twilight, better than I actually expected. He's almost identical to Hall of Famer Richie Ashburn in terms of Rbat and Rfield. However, most of the CF's that are in the Hall of Fame with less than 200 Rbat are old timers. For Beltran to have a shot, it would appear he has to get over the 200 Rbat threshold to gain serious consideration.

The graphic includes two projected 40-year old Beltrans. The first is modeled on Jim Edmonds and simply took Edmonds' Rbat and Rfield from ages 34-40 and added that to Beltran's current totals. The other is based on Brett Butler. The idea was to get a min-max type projection to see where he might finish and whether he might up relative to current Hall of Fame center fielders. 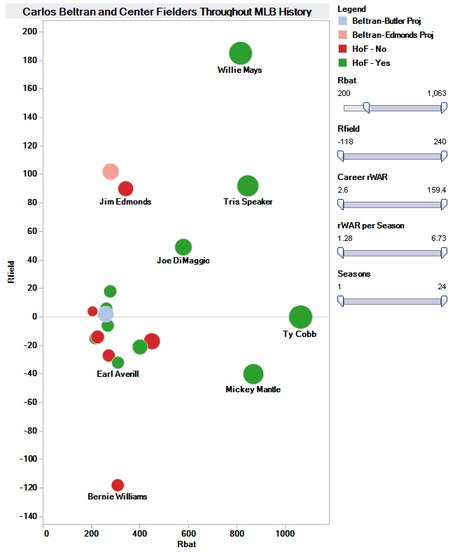 The Edmonds Beltran would be in very good company--only one of eight CF's in history with over 200 Rbat and greater than 0 Rfield.Only four players will have a better Rbat--and three of them are in the Hall. Oh, and there's that Edmonds guy, too. Only one will have been better defensively, and his last name is Mays.

What about the Bulter Beltran? Not as good as Edmonds, but still pretty good. The Bulter Beltran assumes that his defensive ability absolutely disappears. He would still be a part of the eight CF's with >=200 Rbat and >=0 Rfield and spatially would sit nestled in with Hall of Famers Larry Doby, Earle Combs, Edd Roush and Kirby Puckett.

If Beltran manages to have an Edmonds-like 34-40, it will be very difficult to keep him out of the Hall. The interesting thing is we'll have a pretty good idea if he'll get in since Edmonds will be well into the voting process by the time Carlos appears on the ballot.