How Do Good Starting Pitchers Differ From Other Pitchers?

Share All sharing options for: How Do Good Starting Pitchers Differ From Other Pitchers? 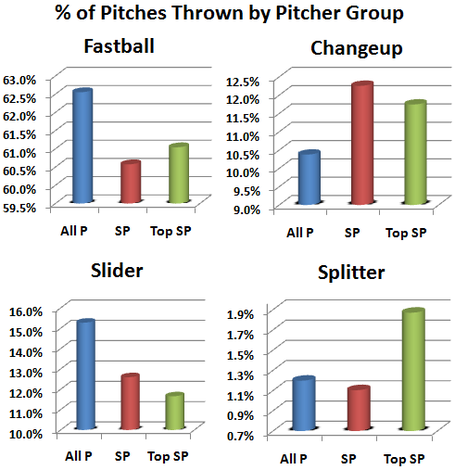 Several years ago I had a brief debate with a friend about what kind of pitch profile leads to the most success for a major league starting pitcher.  I think my friend suggested something about fastball-sinker-slider pitchers and I believe my position had something to do with fastball-breaking ball-changeup pitchers.  But we were both blissfully unencumbered by facts or stats.  So now I’m going to delve into the subject in a little more depth.

I used the cumulative pitching stats from all pitchers from 2003-2010 from Fangraphs.com.  This included the pitch type data from Baseball Info Solutions (BIS), not Pitch f/x.  I put the pitchers included in this data into three non-unique groups:

The graph above shows how frequently the different pitcher groups use various pitches.  The full data for all BIS pitch types is below. 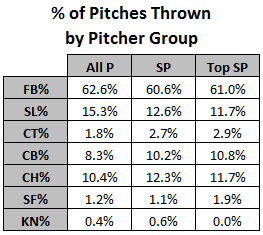 The variation for each pitch from group to group are not huge.  But there are some interesting differences.  Starting pitchers throw fewer fastballs than other pitchers.  This isn’t surprising, as one would expect starters to have more pitches in their arsenal and thus rely less on their fastball.  There is a significant difference in the use of sliders.  Starters use them much less than pitchers in general, and top starters even less than starters overall.  Curveballs are thrown considerably more often by starting pitchers than other pitchers, although each group throws sliders more often than curveballs.  Starters also throw more changeups than other pitchers.

This data doesn’t show a clear pattern in pitch arsenals among the three groups, which is unsurprising given the fairly low level of granularity of this data as I have presented it.  There are some significant differences in fastball, breaking ball and offspeed pitch use, but I was surprised by the relatively modest degree of differentiation. 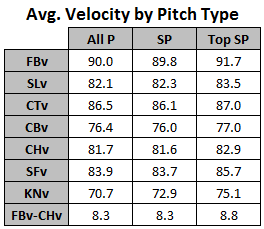 The following table shows the general statistical profile of the three groups of pitchers. 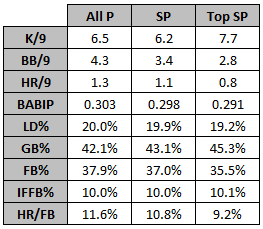 It is harder to explain the differences in home run rate.  Do better starting pitchers disproportionately play in parks unfriendly to home runs?  In part, the answer is yes in that very pitcher friendly parks will help starting pitchers with the various elements which give them good agERA and thus help them make it into this group at all.  But I doubt this comes close to explaining the significant differences in home run rate.  I think there’s something going on here which requires further study.

This little study of course merely scratches the surface on how good starting pitchers differ from other pitchers.  There is clearly a great deal of work that can be done (and is being done) with Pitch f/x and other statistics to identify indices of starting pitcher success.  Useful and reliable metrics on the effectiveness of each pitch thrown would go a long way towards building a comprehensive model of the successful starting pitcher.