A Quantitative History of Retired Uniforms in Baseball

Share All sharing options for: A Quantitative History of Retired Uniforms in Baseball 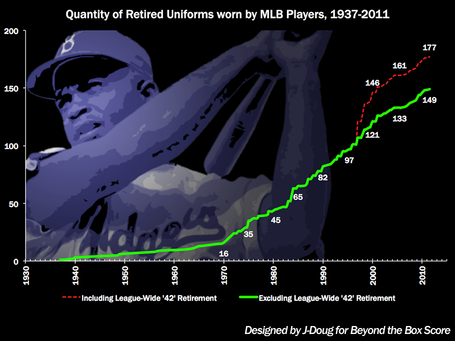 If it feels like teams are retiring numbers and uniforms more than they used to, that's because they are.

The chart above plots the total number of all players' uniforms* that teams have retired over time. Note that the trend continues even when the expansion era ends. Since 1970, MLB teams have retired player uniforms at a rate of one per team per every five years, although that trend looks like it might be letting up.

The dotted-red trend line represents a second value that includes the league-wide retirement of Jackie Robinson's #42. It does not count the number as being retired for a specific team until that team no longer has any players wearing #42.

Numbers that are retired twice are counted twice. Players whose uniforms are retired on multiple teams are counted multiple times. Uniforms without numbers are counted. The four Montreal Expos' numbers that the Washington Nationals refuse to acknowledge are not counted from 2005 onward. Bert Blyleven, who is slated to have his number retired by the Twins on July 16, 2011, is counted.

*The chart does not include managers, owners, announcers or other retired numbers, unless that manager happened to play for that team in the same number or uniform that was officially retired. This means that Billy Martin is included, but not Bob Uecker. This may seem arbitrary now, but the reason for this will become clear in future posts.