Share All sharing options for: Adrian vs. Derek: A Defensive Friendly wWAR Graph 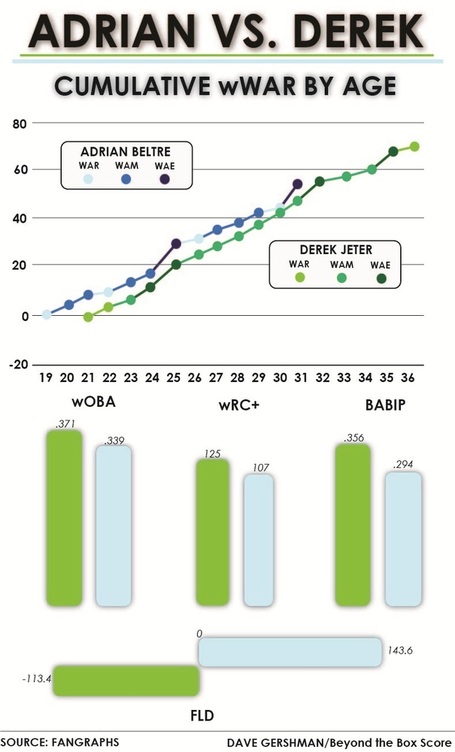 wWAR (weighted WAR) is one of my new favorite toys. Thanks to the great Adam Darowski and Sean Smith, formerly of CHONE, wWAR is a much more conclusive and structured way to quantify greatness. As Adam explains here, wWAR is used to remember the great seasons a certain player had and partially put behind a season in which a player was worth several wins after accumulating only one or two hundred plate appearances...

Sean Smith first created WAE (wins above excellence) which is when a player is worth 3.0+ wins. The benefit of that is actually recognizing greatness and realistic value. The aforementioned Darowski, BtB's very own Adam Darowski, simplified it even more, creating WAM (wins above MVP) for players who are worth 6.0 or more wins.

The graph that I created quantifies a lot and is there to prove several points. First and foremost, Adrian Beltre's glove certainly is one of the biggest parts of his game. It sums up plenty of his value more than his offense, which has been below average during several seasons, which the bar graphs below state.

Second of all, as both players have similar value on the wWAR scale, Beltre is still the better player throughout his shorter career. Not once did Jeter post a WAR at the same age as Beltre that amassed Beltre's. However, Jeter's offense would eclipse Beltre's almost year for year (with the exclusion of 2005 and 2010). Still, it doesn't and didn't make him a more valuable player in any of their corresponding seasons, which is unfortunate on the Captain's part. Alas, this certainly adds Beltre's name in to the Hall of Fame discussion assuming he stays healthy and produces throughout the rest of his career.