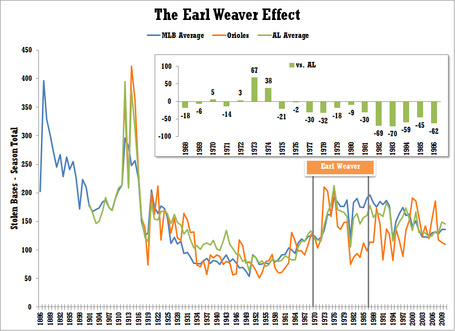 This time, I wanted to take the analysis further and look at another traditional tactic that Weaver targeted--the stolen base. The chart above plots stolen base attempts per year, per team since 1896. The MLB average is represented by the blue line, the AL average the green, and the Orioles the orange. Generally speaking, Weaver did in fact utilize the steal less than other ball clubs.

Interestingly, though, Weaver didn't really begin to consistently steal less until 1977--four seasons after the advent of the DH. In fact, in 1973 (the first year the DH was used) Weaver attempted to steal 47% more than the rest of the American League, and 57% more than all of Major League Baseball.

I don't know enough about those Oriole teams to know why Weaver seemingly ignored his own philosophy. It could be that, generally speaking, the run expectancy for bunts is less than for steals (assuming a high success rate for the latter). The O's success rate on steals was 67% from 1968-1972 and 70% and 71% for the '73 and '74 seasons. They then averaged only 63% until Weaver's last season in 1986, so it could partially have been a factor of the roster he had to work with those two years. (Orioles observers, feel free to offer other hypotheses in the comments section.)

It wasn't until 1977 that Weaver consistently stole less, reeling off 10 straight seasons of between 6-39% less attempts than the AL and 16-52% less than all teams in the league.

That trend wouldn't reverse itself until David Trembley took over in 2008.

All data obtained from Baseball-Reference.