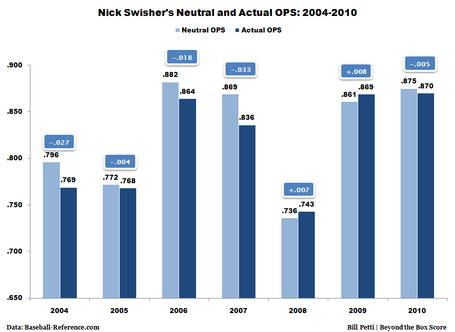 Following a less-than-stellar seasons for the Chicago White Sox in 2008, Nick Swisher was picked up by the Yankees. Swisher responded by posting his best yearly OPS ever (.869) in 2009 and basically duplicated that performance in 2010. Some claimed that the move to New York and it's winning environment not only resurrected Swisher's career, but brought it to new heights.

The chart above plots Swisher's actual OPS from 2004-2010 against his neutralized OPS for those same years. Not surprisingly, Swisher's statistics took a hit during his time in pitcher-friendly Oakland relative to the high run environment of New York.

If you focus on those seasons where Swisher played in over 150 games for both teams, his neutralized OPS was actually .008 higher in Oakland--in reality, he has been the same hitter in New York as he was in Oakland.

All things being equal, his 2008 in Chicago can be chalked up to some bad luck (a career high line drive rate that only translated into a .249 BABIP, almost 40 points lower than his career average), and his 2009 season simply regression to his true talent level. For some perspective, if Swisher's BABIP had been .249 last year, his wOBA would have been approximately .063 points lower. That's pretty significant.

The real difference between Swisher's 2006-07 in Oakland and his 2009-10 with the Yankees? Basically seven more doubles off of left-handed pitchers. Seriously.

Swisher's splits have been eerily consistent.

What's more interesting is that Swisher hasn't seemed to benefit from the short porch in New York.

So while it is plausible that players might benefit from a move to a winning environment, they aren't going to bend the laws of baseball physics. Your talent level is your talent level, and there aren't many ways around that.