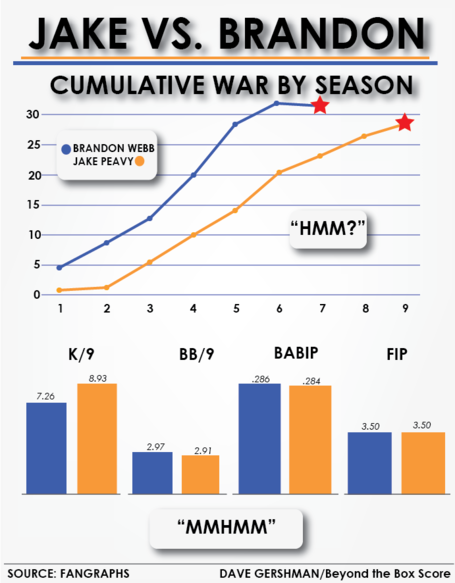 Despite Jake Peavy getting a few months of 2010 work in, both Peavy and Brandon Webb have dealt with barely any positive news over the last few seasons regarding their health and results. Take Webb for example; the last time he threw a pitch in the Majors was during a horrific outing on Opening Day in '09 in which he served up home run after home run after home run all over the course of 4.0 innings. Peavy was acquired by the White Sox in exchange for Aaron Poreda and someone who's been real good for the Friars, Clayton Richard. There's been almost nothing to speak of since the 2008 season regarding the former Cy Young winners and aces.

However, stats and career peripherals aside, the one thing they have in common is that both are attempting comebacks after dealing with possible career ending arm injuries. It's been an interesting past few weeks in White Sox camp as Peavy would throw a fantastic several innings and then as of recent, he'd re-injure his arm. Webb as of today is going to be shut down temporarily with a similar injury. The one thing that came to mind when many read about Webb's injury was -- "Oh, why am I not surprised?"

So let's take a look at the positive career's of Jake Peavy and Brandon Webb. The aforementioned former aces were nothing short of consistent, healthy, and nasty during from the start of their careers until the end of 2008. However, there are some differences as well between the two. As Webb was worth more wins thus far in his career, Peavy's peripherals have been better. Both were worth a significant amount of wins and were shutdown number 1's despite neither having a fastball or sinker that averages anything more than 91 miles per hour.

The graph displays the rest but looking back on the career of two fantastic pitchers it is sad to think of what is going on now with the two. You hope for future health on the mound. You hope that the shoulders of Peavy and Webb improve strength. You hope for the aforementioned nastiness that hardly separated the two. Let's hope for the best.