The Evolution of Clay Buchholz's Slider

Share All sharing options for: The Evolution of Clay Buchholz's Slider

Lined up to be third in the Red Sox' 2011 rotation, Clay Buchholz has finally established himself as a major league starting pitcher.  He's gone through his fair share of highs and lows since his first call-up in 2007, including a no-hitter in his second career start and a world of struggles that plagued his 2008 season.  While his low-mid 90s heater, hard 12-6 curve and straight change have been staples in his repertoire for the majority of his career, his slider has evolved quite a bit. 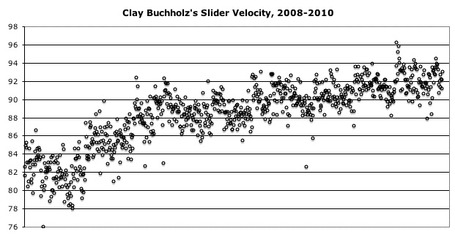 The graph above simply shows the velocity on Buchholz's slider from 2008 to 2010.  As you can see, it's increased 8-10 mph since 2008; that's a jump so big that it's hard to consider it to be the same pitch - and in a bit, I'll elaborate on why I don't consider it to be the same pitch.  If you also pay attention to the fact that Buchholz has seen his fastball velocity increase, you can see the adjustment in the slider more clearly.  The way I typically do this is by subtracting the game-by-game velocity of the slider from the fastball (in this case, the two-seamer since that's Buchholz's primary fastball); also, this eliminates the fluctuation in park calibration.  Anyway, take a look at the difference in the slider to the fastball: 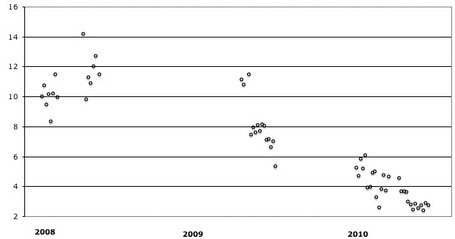 As you might have guessed, the slider didn't only get harder - the increase in velocity corresponded with a decrease in downward movement.  The chart below is similar to the previous one, except it shows vertical spin deflection (in inches) instead of velocity.  These days, the pitch gets entirely different movement than it did in 2008:

What's causing this?  I did a similar sort of analysis with Joba Chamberlain's slider last year, and I concluded that the decrease of movement on the pitch was due to a lapse in command.  In Buchholz's case, it is a conscious decision: first, it would be impossible for a pitch to increase by at least 7 mph and lose that much movement "by accident".

Second, we have an awesome article by Brian MacPherson from a May 2010 issue of the Providence Journal.  There are three things from the article that I found extremely telling.  Here's Buchholz talking in the middle of last season about the velocity increase and how he was actively trying to throw the pitch harder:

If you look back at fastball-slider velocity chart, you can see what Buch is talking about.  For the first three starts of 2009 in which he through his slider (July 17th through August 3rd - he didn't throw any sliders on July 28th), the pitch resembled its 2008 form.  Starting August 8th, it began to tighten up noticeably, and by the end of the year, it looked close to its 2010 version.

Another thing that caught my eye was a quote from MacPherson regarding Buchholz's slider grip and his assistance from teammate Jon Lester:

"As part of the evolution of his slider, Buchholz saught the guidance of Lester and adapted a little bit of Lester's cutter grip into his slider grip.  Like Lester, Buchholz can throw his slider with less break to get a strike and with more break  - he puts a little more pressure on his middle finger to make the ball move - to get a swing and miss out of the strike zone."

I would have no problem with calling the current incarnation of Buchholz's breaking pitch a cutter, especially given the fact that he's adapted Lester's cutter grip.  Buchholz himself has said it's "both" a cutter and a slider, and that he puts some extra pressure on his middle finger to apply more movement when necessary.

Finally, the article had a quote from pitching coach John Farrell that alludes to the change in Buchholz's change in approach with the pitch:

"The delivery of it - and the execution of it - is a little bit more of a fastball mindset.  It does create a little bit more power, a little bit later action, a smaller break, but it's easier to control and easier to get into the strike zone.  He's gone from what was more of a true slider and what would be more hit-and-miss prior to the midpoint of last year to a pitch that he feels more is just a variation off a fastball."

That point leads me into this question: what kinds of results have his sliders gotten over the past three years?  I could break it up into 2008, 2009, and 2010, but I feel that it would be more accurate to include those three appearances in July and August of 2009 with 2008 due to the similar action on the slider.  I'll call 4/5/08-8/3/09 the "slow" phase.  Then from 8/8/09-10/4/09 would be the "medium" phase, when Buchholz was experimenting with the increased velocity.  The 2010 season represents the "fast" cutter phase.  I've also included average velocity and spin deflection values from these three periods.

So there you have it.  Buchholz has turned his slow slider into a hard-biting cutter, and he has completely changed the way he uses it.  Normally I would be more concerned that he's sacrificing swings and misses, but he already has a dynamite changeup (.462 whiff rate last year, .461 since 2008) with which he can fool batters.
Data are from MLBAM and are courtesy of Joe Lefkowitz's tool.