Share All sharing options for: The Earl Weaver Effect, Part I: Bunting Edition 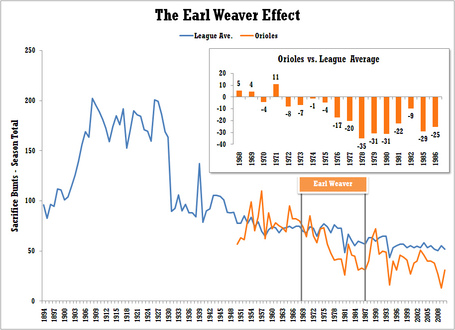 Earl Weaver is generally regarded as one of the greatest managers in major league history. As the skipper of the Orioles, Weaver amassed a record of 1460-1060, six division titles,four pennants, and one World Series championship (1970).

Weaver is also generally regarded as the grandfather of sabermetric managers due to his innovative use of statistics as well as his willingness to eschew traditional strategies, such as the stolen base and the hit and run. Weaver's famous quote that "on offense, your most precious possessions are your 27 outs" wonderfully encapsulates the view of many saberists (and backed by run expectancy analysis) that sacrificing outs to move runners into scoring position is not that valuable over the long haul.

Prior to Weaver's arrival in mid-1968, the Orioles typically bunted as much or more than the average team (78 bunts per year vs 75 for the league). With Weaver at the helm, the Orioles still used the sac bunt, but they did so an average of 20% less than the rest of the league. If you just isolate 1972-1986, Weaver's Orioles averaged 27% less bunts than the league, reaching over 40% in five different seasons.

Weaver did not manage the Orioles in 1983 or 1984, but when he returned for the 1985 and 1986 seasons the team's sac bunts again remained well below league average.

Even after Weaver retired, the Orioles have leveraged the sacrifice less than the average team. With the bunt rate stabilizing at about 53 per team per year since 1995, the Orioles have averaged only 37 per year during that same time period--about average for an AL team over that time period.