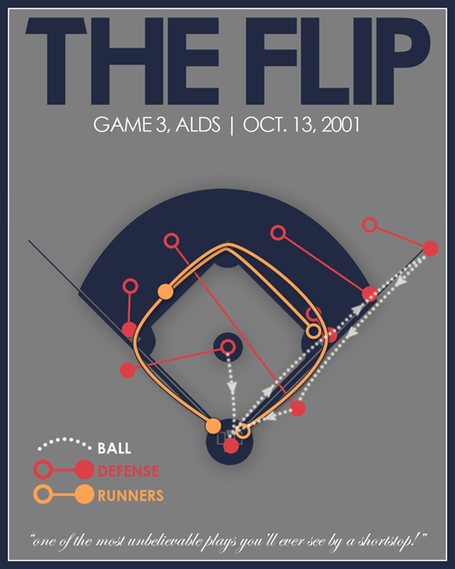 Suddenly, out of nowhere appears Jeter, swooping in from the middle of the infield, running toward the first-base line. Having read the trajectory of Spencer's sailing throw, and realizing it's going to go over Martinez's glove and skid toward Oakland's on-deck circle, Jeter dashes between Martinez and Posada.

With the Yankees and the stadium looking on in sheer astonishment, Jeter scoops up the ball on a bounce with two hands along the baseline. With his momentum carrying him off the field and toward the Yankees' dugout, Jeter, still in motion, flips the ball backhanded, 20 feet to his right, lateralling the ball sideways in the same manner in which a quarterback pitches a football on an option play.

"I didn't have time to turn around, set up and throw," Jeter told the press afterwards, as if the play was simply routine. "Basically, I just got rid of it. If I tried to spin around, he would have been safe."

As Giambi comes chugging home, Hernandez, doing what the on-deck hitter is supposed to do when there is a play at the plate, signals for Giambi to slide. He yells. He waves. But Giambi doesn't look for him, doesn't see him, illustrating his poor baserunning fundamentals and instincts. "The stadium was so loud, he couldn't hear me yell, so I just put my hand out and told him to go down," Hernandez would say later.

Meanwhile, Jeter's backhand flip is so accurate that Posada needs only to reach back and simply tag out Giambi. When Posada reaches to catch the ball, he swipes at Giambi with his glove. Giambi, who should have slid into home plate, goes in standing up. Posada's tag gets Giambi's right foot just as it is about to come down on home plate. Giambi tries leaping over Posada's tag. He's unsuccessful, and Kerwin Danley, the home-plate umpire, calls him out.

You've no doubt read or perhaps heard some of the thousands of words uttered about this improbable play, but now you can see just how absurd the entire sequence was. As a saber site, we can roll our eyes all we want when we hear utterances of clutch and grit and so many other boringly satired anti-saber words. We know, or at least we think we do, that some things indicate talent and success and others are just luck and should be treated accordingly.

This play, though? This is one of those where we all can drop the silly tiffs our octogenarian counterparts still in print have with our basement-dwelling peers. We can drop the arguments over ribbies and wins and wOBA and UZR and which WAR is better for which use. Sometimes we can step back and go, "wow, that was a damn good play. It's beautiful."

We agree that it's beautiful. Fine. But was it luck or grit or extreme undeniable talent? It's probably some part of all of those, but if you watch the video (official | another angle) it appears that Jeter had properly moved to the pitcher's mound area, then saw the throw was off-line and instinctually moved in place. Yeah, all that was in the blink of an eye. Luck and talent were both involved.