The Brady Anderson of Defenders

Share All sharing options for: The Brady Anderson of Defenders

Blah, blah, blah. Brady Anderson. We still hear about his crazy 50-homer season in 1996, even today. It's the poster child for steroid-powered peaks. Of course, there's no evidence on Anderson. And I'm can't say I'm convinced he used. For review, here's what Brady Anderson's career looks like (by Baseball-Reference's Batting Runs Above Average): 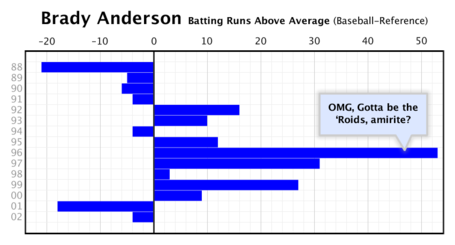 Sure 1996 was the highest batting run total he posted (by 22 runs), but this is still a guy who had posted 31 and 27 runs in other seasons. Sure, it's a crazy spike, but it doesn't have to be chemically assisted.

I've been wondering who the defense version of Anderson would be, now that we have metrics like Total Zone that go back to 1871. I know defense doesn't get nearly the publicity home runs does, so I entered this exercise certain that this player's defensive performance had never been questioned. I was right about that.

So, here's the player I identified as the Brady Anderson of defenders. Who is he? Check after the jump:

Give up? It's none other than shortstop Adam Everett. His 2006 total of 40 Total Zone runs is the all-time single season record. His second highest total was 11 runs. If we're assuming Brady Anderson used 'roids, what are we assuming about Adam Everett?

Okay, to be fair, we're probably assuming Total Zone overrated him. His ADR (Aggregate Defensive Rating, compiled from FSR, UZR, DRS, and Total Zone) had him at 34, while the second-best total for Everett was 18 runs. So, even the aggregate has him nearly doubling his second-highest total in 2006.