Playing around with the idea of WAR Slope

Share All sharing options for: Playing around with the idea of WAR Slope 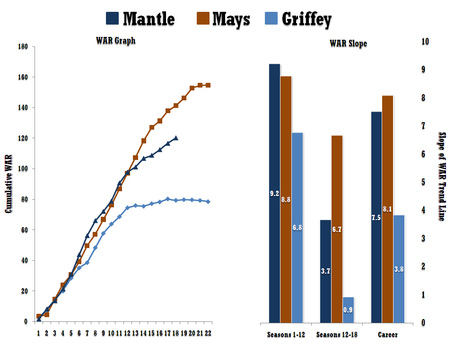 So, like a lot writers for and readers of Beyond the Box Score, I play around with lots of ideas related to analyzing the game. Some ideas are good, others...not so much.

One idea I've been playing with recently is WAR Slope--the slope of a line of best fit for a player's cumulative WAR over several seasons.

WAR Graphs are great in that they allow us to visualize how a player (or players) accumulated their value over the course of their career. Plotting, say, Willie Mays against Mickey Mantle illustrates how phenomenal Mantle was during his first 10 years in the league and how amazing Mays was from start to finish. It's easy to see how much better Mays was given how his career unfolded compared to Mantle.

This got me thinking about how to describe differences in WAR Graphs outside of simply cumulative WAR over different stretches. As you increase the numbers I think you lose some of the magnitude between totals. So I thought using the slope of players' cumulative WAR over a specific period might be a simpler solution since the numbers are likely to single digits (at least, in most cases).

Let's return to Mantle and Mays, and we'll even throw in a little Ken Griffey, Jr. just for comparison's sake.

Mantle and Mays were on a similar WAR trajectory through season 12, with Mantle posting a WAR Slope of 9.2 and Mays 8.8. From seasons 13-18, however, the slopes couldn't look more different. Mantle's slope decreased by almost 60% to 3.7 while Mays more than doubled Mantle with a 6.7. More impressively, Mays would go on to play four more years than Mantle and maintained a WAR Slope of 5.2 from seasons 13-22 (ages 32-41).*

(*I also ran the slopes by age, and they are basically identical, at least for these three players)

Griffey, Jr. started off quite promisingly, posting a WAR Slope of 6.8 during his first 12 seasons. Beginning in season 13, however, Griffey's performance plummetted. He managed a paltry slope of .9 over the next 6 seasons (a 86% drop).

For me, thinking about the slope of puts the trajectory of players' careers in perspective with a simple number. It's another way to compare careers and, really, phases of careers amongst players. It's clear from cumulative WAR that Mays and Mantle were elite players and that Mays accumulated more WAR over his career. But looking at the different slope of their performance at various times highlights how their careers progressed and how Mays

So there it is, my idea in short. Like I said, it could be good, it could stink, but I thought I'd share the first cut of it. Feel free to rip away below in the comments section.