Do closers always pitch in the most important situations?

Share All sharing options for: Do closers always pitch in the most important situations?

This type of topic has been covered before, but I was thinking about the idea of a team potentially using a slightly lesser pitcher as a standard closer - allowing the best bullpen arm to be used in other high leverage situations - and decided to look at the distribution of save opportunities versus leverage index for relievers from 2010. Nothing too fancy; just a simple graphic: 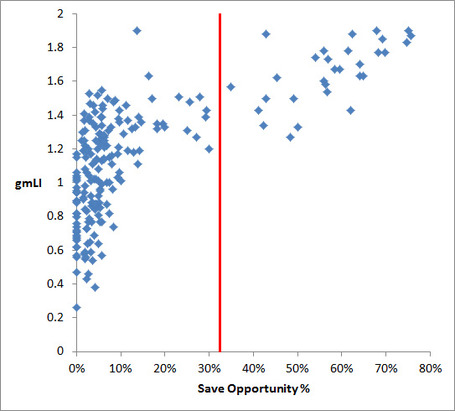 That's all relievers with at least 30 IP from lat year. gmLI is the leverage index when the pitcher entered the game, and save opportunity % is the proportion of saves and blown saves to total games. The red line divides the top 30 guys from the rest according to save opportunity %, though a few guys with some saves fell to the left of it (Trevor Hoffman, Fernando Rodney, Brandon Lyon).

The major outlier seems to be Daniel Bard, who had a 1.9 gmLI with Boston with only 3 saves (and 7 blown saves*). Jonathan Papelbon - the team's nominal closer - had a 1.85 gmLI. The other Sox had a similar situation, with Matt Thorton (1.63 gmLI) beating out closer Bobby Jenks (1.58 gmLI). Atlanta too (Peter Moylan at 1.52, and Billy Wagner at 1.43). Both Ryan Perry (1.48) and Joel Zumaya (1.36) beat out Detroit closer Jose Valverde (1.27). With several relievers switching clubs mid-season, injuries, shifting roles, and whatnot, this isn't exact.

Still, while for most teams the main closer was their highest leverage reliever, there were enough teams where some other guy ended up coming in for the most important situations** to not get too hung up over whether the 3.50 ERA pitcher or the 3.75 ERA pitcher is set to get the ball with a three-run lead in the top of the ninth***.

* Using just saves instead of saves plus blown saves mostly just compresses the points on the left side of the graph.

** Ignoring the multi-team pitchers, the average gap in gmLI between each team's top guy when it came to save opportunities and their (next) highest leverage pitcher was just 0.19.

*** This presumes the manager is more or less stuck using the closer in the "usual" manner, which most are the majority of the time I think.