Did the Giants start winning because of the "clubhouse" or their talent?

Share All sharing options for: Did the Giants start winning because of the "clubhouse" or their talent? 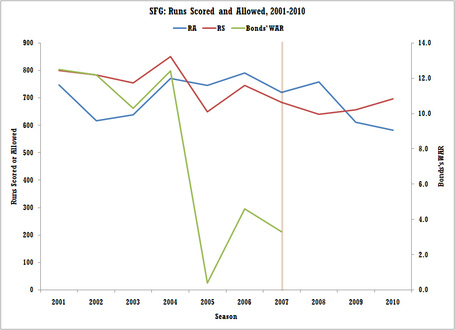 Gene Wojciechowski had an article yesterday over at ESPN that talks about the rise of the Giants after Barry Bonds retired and emphasizes the impact of the change in the clubhouse environment on their success.

Lincecum isn't saying that Bonds' exit is partly why the Giants are world champions today; I am. But he is saying team chemistry matters in ways that can't be quantified from reading a box score. After all, it's hard to win games when you're dragging around a cinder block or two of Bonds-related drama.

This isn't an earth-shattering sentiment, but Wojciechowski is making a pretty clear causal statement; removing Barry Bonds from the San Francisco Giants allowed the rest of the roster to play better simply because he wasn't creating a negative work environment.

Now, I firmly believe (based on rigorous research, of course) that creating an engaging work environment leads to better overall performance. However, there is a ceiling to that performance based upon the talent level of your employees. It's no different with baseball players.

The chart above plots the Giants' runs scored and allowed over the past decade. It also plots Barry Bonds' WAR. It's pretty clear that as Bonds went so went the Giants' offense. Once Bonds started to decline, their offense dropped below league average. Furthermore, even after Bonds departed, the offense continued to score less than average relative to the league.

So Bonds' departure didn't seem to help the offense much. The difference, as we all know, has been the emergence of their pitching.

The Giants managed to drastically reduce their runs allowed form 2008 to 2009 by 148 runs. Combined with only a modest increase in runs scored, this increased their expected wins by 20. They further decreased their runs allowed to 583 in 2010. Combined with a 40 run increase on the offensive side, the Giants improved their expected wins to 95--8 more than in 2009. Even if they offense had remained the same as 2009, the Giants would have been expected to win 91 games in 2010.

So if Bonds' departure had an effect on the Giants' winning it had to manifest in the pitching. Does this make any sense? Wojciechowski offers no causal link or mechanism to get us from Bonds to the pitchers' performance, just ad hoc quotes from players that they like their teammates. Did Bonds' presence in the clubhouse prevent Giant pitchers from reaching their true talent level? If so, there was a pretty big lag since their runs allowed got worse in 2008 after Bonds left. Oh, and the linear trend of their runs allowed has been decreasing since 2004.

I think it has more to do with, for example, Barry Zito cutting his FIP from 4.83 to 4.24 and adjusting his approach and Matt Cain cutting over half a run off his ERA since 2007 by reducing his walks and BABIP.

It's true that current metrics do not capture every aspect of the game, but before claiming that some variable that is next to impossible to directly observe is causing an outcome we might want to look for other, more tangible reasons for that outcome. Occam's razor and all.