Does Wade Davis Tip His Curveball?

Share All sharing options for: Does Wade Davis Tip His Curveball?

No one can really tell for sure, but Davis' curveball release was significantly higher than the release of his other pitches.

His curveball was again, by far his worst pitch if you consider the amount he threw it plus the results -- it was -2.1 runs below average. You may say, "well his change-up was -8.6 runs below average", but remember the amount of times he threw it (47). Not only that, but batters squared up his curve more times per curve thrown than any of his other pitches. His curve was put in play 18.6% of the time, his four-seamer was put in play 20.2% of the time, and his two-seamer was put in play 18.2%. Now, unlike his fastball that got hitters quite off balance, Davis' curve was only fouled 12% of the time, meaning hitters were able to square it up more than his other pitches.

With the curve being thrown at an average velocity of 79.1 (not bad for the  speed of a curveball), he amazingly only had hitters swinging 35% of the time, whereas his four-seam and two-seam fastball were swung at 49% and 42% respectively and his change and slider were swung at 40.4% and 48.3% of the time respectively.

Since Davis' curve was taken a significantly less amount of times than his fastball or slider but resulted in a ball put in play when swung at (a lot more than the swing and foul rates should suggest), it can be assumed that his curveball was not only easier to hit than his other pitches but much more recognized by hitters as the ball left his hand. His release point of his curveball was consistently several inches higher than his the release of his change up, the next highest released pitch by Davis. Plus, in terms of the batters eye, it was the only pitch that didn't stay in the same plain as the others, on average. With a slider being an above average pitch, it was also whiffed at 13% of the time, while his curve was whiffed at 4.6% of the time. His four-seamer was whiffed at 6% of the time.

Alas, Davis curveball was certainly hitable. A consistent release point on all of his pitches would result in a more bunched up and blended color scheme on the release point grid. Having thrown more curveballs than any other off-speed pitch, you'd expect he'd be able to hammer down consistent release which would benefit him with better results. Many pitchers throw their curveballs at a slightly higher release point than their fastball, but with much better results and several inches closer to his closest pitch, unlike Davis' distance differential between his curveball and slider. 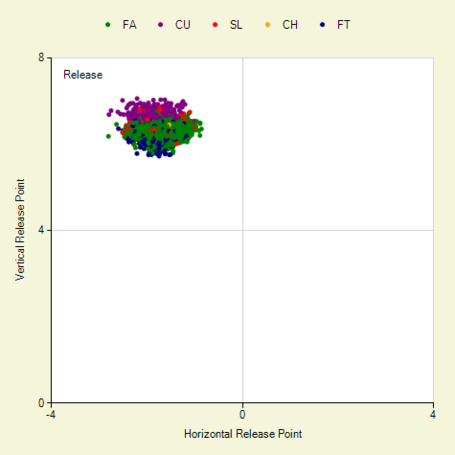