The Hall of wWAR: Designated Hitters

Share All sharing options for: The Hall of wWAR: Designated Hitters 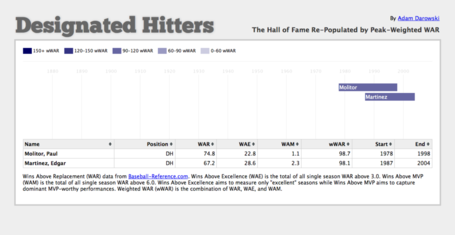 This is a quick one. Just one current Hall of Famer played DH more than any other position, and that's Paul Molitor. It's time to welcome another.

This one player is not in the Hall of Fame, but is now being inducted to the Hall of wWAR:

This player is either still active or retired and not yet eligible for the Hall, but has already met the threshold to be inducted to the Hall of wWAR:

That's it for the position players. We'll kick things back off next week with the pitchers. For now, feel free to go back and peruse the past posts: