The Hall of wWAR: Right Fielders

Share All sharing options for: The Hall of wWAR: Right Fielders 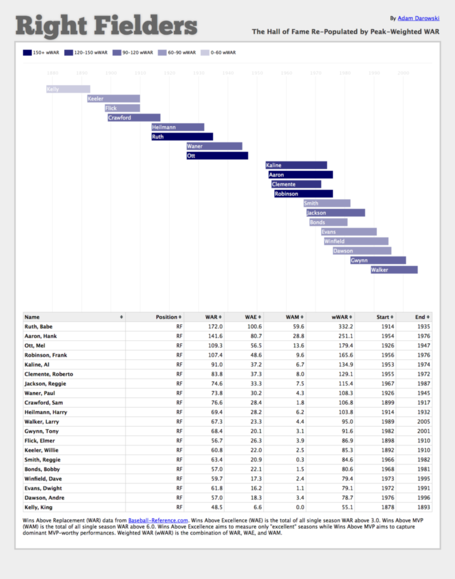 Right field is the most densely populated position in the Hall of Fame, with 24 inductees. A full third of the (eight) are bumped to make room for better players. The spectrum is wide here, with players ranging in value from Enos Slaughter (a great player) to Tommy McCarthy (a head scratcher).

Just four players are added in their place, but they were four damn good players who I'm happy to see added.

These four players are not in the Hall of Fame, but are now being inducted to the Hall of wWAR:

These five players are either still active or retired and not yet eligible for the Hall, but have already met the threshold to be inducted to the Hall of wWAR:

Up next, DHs. Then on Monday, pitchers!