The Hall of wWAR: Center Fielders

Share All sharing options for: The Hall of wWAR: Center Fielders 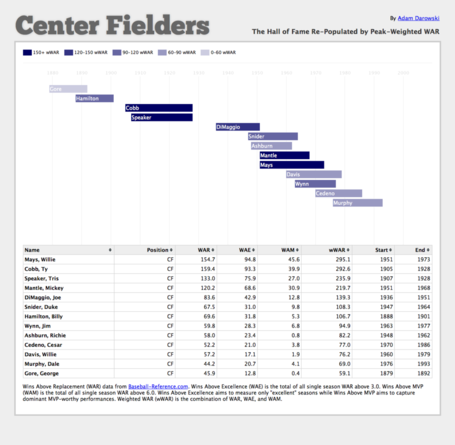 When we switch from the Hall of Fame to the Hall of wWAR, no position loses as many players as center field. Nine center fielders miss the cut. Some of them are surprising (Kirby Puckett really didn't pile up much WAR, did he?) while some are painful (it doesn't feel right to remove Larry Doby, but he obviously made contributions that transcend his stats—the only factor considered here).

Why is this okay? I can identify four players who make the Hall of wWAR who actually spent between a third and half of their career in center, despite being listed elsewhere. That, and we have a ton of worthy center field candidates hitting the ballot in the next fifteen years or so.

These five players are not in the Hall of Fame, but are now being inducted to the Hall of wWAR:

These five players are either still active or retired and not yet eligible for the Hall, but have already met the threshold to be inducted to the Hall of wWAR:

This will be the only wWAR post for today. I'll get right fielders and DHs up tomorrow. Then I'll hit you with all the pitchers at once come Monday.