Share All sharing options for: MLB Basic Agreement Generates Profit for All 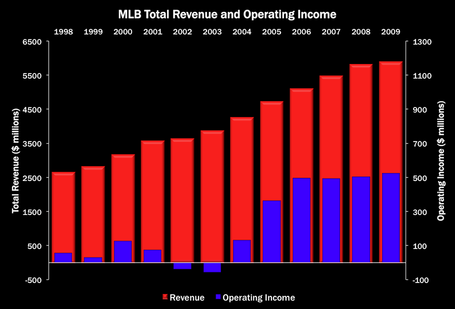 With the NFL, NBA and upcoming MLB labor talks in the news, collective bargaining and its impact on sport have commanded my attention. The 2003-06 Basic Agreement (renewed for 2007-11) has been a boon to the game, despite complaints about the inequities of revenue sharing and rumbles about the declining share of revenue spent on player salaries.

William J at TYA rightly ascribes part of baseball's labor peace to ever-growing revenue. If you'll refer to the chart above, you'll notice that revenue (in red) has grown steadily despite the "Great Recession" of 2008-09.

But when it comes to the CBA, it's not the revenue that stands out--it's profit that has made all the difference. If you'll once again refer to the chart above, income (in blue) has jumped significantly during the current bargaining regime. But even total profit doesn't tell the whole story.

Yes, it's significant that profits, which prior to the 2003-06 CBA hovered around 2%, have stabilized at 9% league-wide. What's even more significant is that the profit is widely distributed. Take a look at the chart below, that plots operating income (in blue) vs. the number of profitable teams in any given year (in red). 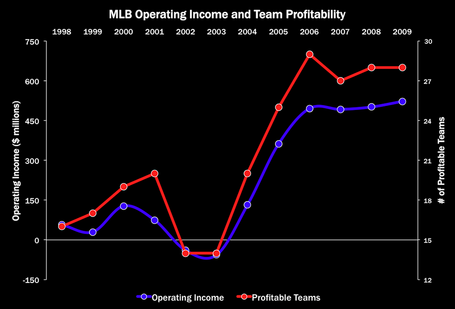 As profits spiked, so did the number of profitable teams. Frankly, this shouldn't be too surprising, but there's never any guarantee that a rising tide will lift all boats unless the financial structure of the system ensures that all teams prosper. In Major League Baseball, we now have a system in which almost every team will make money in any given year.*

*Of course, this isn't so great for competitive balance. If profits are guaranteed, there's less incentive to improve the on-field product, especially in the cartel which is organized professional sport. But that's a another post altogether.

MLB teams have the Basic Agreement to thank for the status quo. Without revenue sharing, such an even distribution of operating income would not be possible.

But let's be careful when extrapolating revenue sharing success to labor peace.

An even distribution of income only reduces the likelihood of conflict among owners, not conflict between the owners and the MLBPA. As salaries continue to decline as a function of total revenue, look for the players to claim a larger piece of the pie. Not to worry, however, as these differences can be resolved without a labor stoppage. As long as there's common information about the financial state of the game, both sides should be able to identify a mutually beneficial equilibrium.

That's the benefit of owners opening their books to the union.