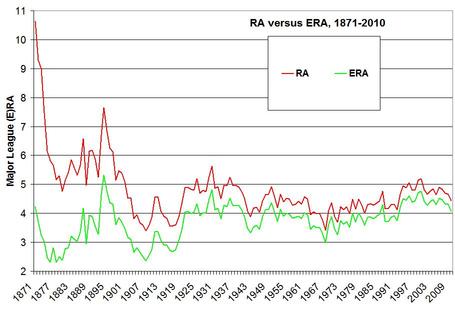 I hate Earned Run Average. I doesn't add anything truly useful over Runs Allowed, unless you think that errors are a Really Good Stat. I mean, I guess they're better than Pitcher Wins or something, but... I don't even have the energy to get into it right now.  I'm not even talking about ERA vs. FIP, or DIPS or tRA or SIERA or anything like that. I just mean the "E" part of it. There are many, many good posts on why the "earned" rules is silly, for example this one by Jack Moore or this classic by Michael Wolverton, and I'm not going to get into it, here. Moreover, if you're, say, calculating pitcher WAR, for example, the ERA scale (with whatever statistics) will undervalue pitchers when compared to position players since you aren't comparing it to a "real" runs scale, the runs-to-win conversion is thrown off, and so forth. Sigh. However, I grant that it is still the most common pitching statistic, and most of the newer pitching stats are scaled to it (not because the creators "believe" in ERA, but because they understandably want to use a scale people are familiar with). But until That Great Day comes when ERA is banished and we're all on an RA scale, having a quick "scale" to convert from one to the other might be helpful.

I decided to do this rather simple "dump" because I am thinking of doing a few slightly more involved pitching-related examples down the road. In the past, I've posted both RA and ERA scaled-stuff, but if a chart has more than a few columns, it really gets messed up. On one hand, I'm tempted just to go cold turkey and just post everything scaled to RA. On the other hand, despite my irritation with ERA and my thought that the best way to "cure" people of ERA is for all the stats sites to simply switch to using all RA-scale, all the time, I understand the difficulty of working against such a high coefficient of static friction involved. I haven't decided what I'm going to do in my future posts (and I do want to make them user-friendly for all 18 non-BtBS readers who persuse them).

If I do decide to go "all RA" or if you want the conversion or comparison for other reasons, here is the a table with the yearly list of major league-wide RA versus ERA from 1871 through 2010. As you can see., in recent seasons the "scale" of ERA divided RA has been about 0.92. So if you want to use an ERA-scaled stat in an RA fashion, a quick workaround is to divide it by 0.92. If you want to be more precise, you can use the specific conversion. The "Diff" column is, as you might expect, lgRA minus lgERA for each season. As you might surmise from the graph above as well as the table below, there's a pretty big "improvement" in the early part of the century. My assumption (I'm far from a historian of baseball) is that it's partly an improvement in fielding skills and positioning, but probably mostly improvements in glove design and playing-surface upkeep. It would be fun to have a discussion on those topics.

Hopefully this is useful, or at least interesting, to someone out there. As always, the source data is from the freely available Baseball Databank, another great resource proviced by Sean Forman.