Dave vs. Carlos: Brushing the Pressure Off of Carlos Beltran's Shoulders

Share All sharing options for: Dave vs. Carlos: Brushing the Pressure Off of Carlos Beltran's Shoulders 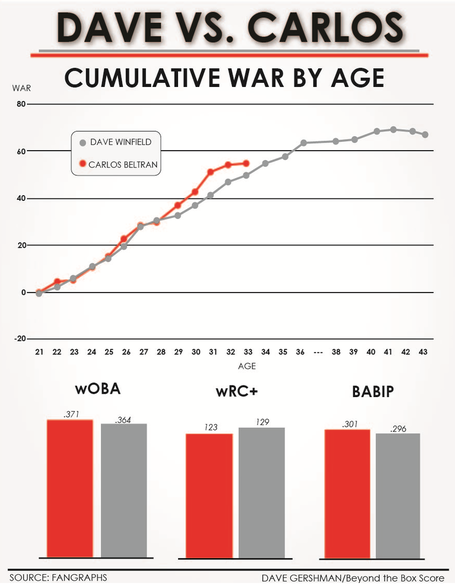 For the better or worse, Terry Collins and his posse decided it was best to move Carlos Beltran to right field. Despite a hefty final year of his salary and an injury rattled past several years, prognosticators see good things in the cards regarding Beltran (Marcel, James, and ZiPS all project an above average offensive season). Whether he plays well or not; Whether he becomes his old self or not, he's still easily one of the best players of this generation. Hec, he might even be a future hall of famer.

Among his fellow right fielders throughout the NL East such as Jason Heyward, Jayson Werth, and Mike Stanton, Beltran may or not be the best, but he definitely has a chance to have the best season this year. Despite a rough past two years and a $19MM price tag for a player past his peak, Beltran is only one healthy year removed from a fWAR over 7. The soon-to-be 34 year old doesn't even need to be back to '08 form to be a productive if not a well above average right fielder, as a 4-6 fWAR would certainly please the Mets. I'll bet you 7 years and $126MM that Jayson Werth at least has a hard time being worth 6+ wins in 2010.

As the WAR Graph states, Beltran is and has been one of the best players of his time. Keep in mind, he still has quite a few years left. He's had a great career, and should be destined for Cooperstown. With Dave Winfield being deserving and certainly a better player than many other Hall of Famers, Beltran certainly has a case. Alas, if Beltran checks out Beyond the Box Score every once in a while, he'll know that he can take some pressure off of himself -- he's had a fantastic career.