Benefit of the Doubt: More on Pitchers Expanding the Zone

Share All sharing options for: Benefit of the Doubt: More on Pitchers Expanding the Zone 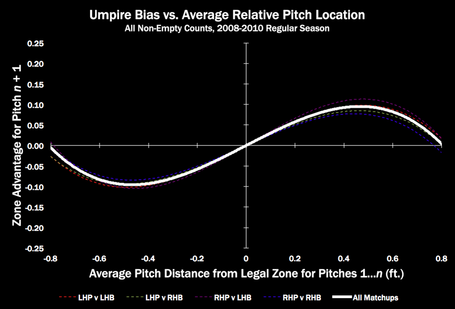 In last week's post about how pitchers expand the zone, commenter Bhaakon asked a very good question: how do we separate pitchers working the zone from the biases that umpires express based on the ball-strike count?

While my first response came in the form of a referral to the statistical model upon which I base my findings, I've since decided that A) you all deserve a better answer than that, and B) I need to clean up some of my data anyway, so I might as well compose another post.

The result is the curve you see in the chart above, which looks at all non-empty counts during the 2008-2010 regular seasons (methodological information at the conclusion of the post). But to answer Bhaakon's question, does this effect hold when we control for ball-strike count?

As in my previous post, it appears the sweet spot for pitchers is about 6 inches off the plate (as seen above), although the advantage seems to be closer to one free strike out of ten pitches called, rather than the one-in-sixteen I originally concluded. More strikingly, there's a near-equal and opposite effect when pitchers consistently throw 5-6 in. inside the boundaries of the legal zone, costing the pitcher an extra ball for every ten pitches called. 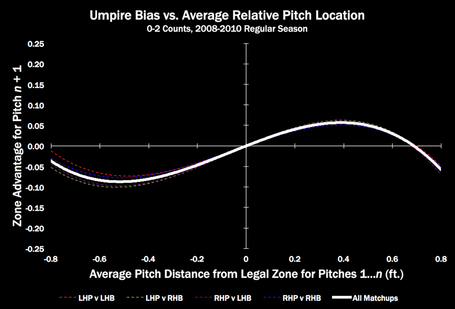 When we look at extreme pitchers' counts only (above), we see essentially the same curve shifted downwards. This is expected, as batters get the benefit of the doubt in 0-2 situations. On an 0-2 pitch, the batter has a 10% chance of seeing a legal strike turn into a free ball if prior pitches averaged 6 inches inside the legal boundary during the AB.

Conversely, the pitcher shouldn't expect a free strike more than 5% of the time on an 0-2 count, even if he consistently hits the sweet spot about 0.4 ft (4.8 in.) off the plate. 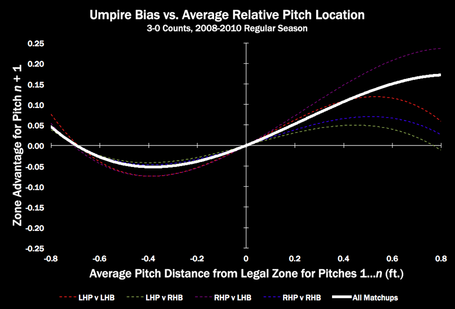 In extreme hitters' counts (above), the curve not only shifts northward but stretches eastward as well. While the best a batter can hope for is a 5% chance that the ump will call a ball on a pitch in the zone (at about 0.4 ft inside the strike zone) the pitcher can increase his chances of scoring a free strike by 20% on 3-0 counts if his prior pitches average about a foot beyond the zone.

Note also the significant variance off the plate for different match-ups: while the sweet spot for LHP v LHB, LHP v RHB and RHP v LHB match-ups is about half a foot off the plate, the sweet spot for RHP v LHB match-ups is about 0.8 ft. (9.6 in.) beyond the threshold, with a payoff of a 0.20 zone advantage or greater. These variations should be taken with a grain of salt, however, as much of this is due to sample size issues. 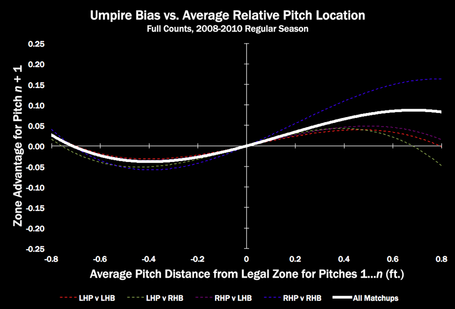 A look at a count-neutral, high-impact situations yields some interesting findings. Hitting the sweet spot about 0.7 ft. (8.4 in.) off the plate earns pitchers a 10% boost in the probability of an errant strike, while pounding the zone at 0.4 ft. will cost the pitcher less than a 5% chance of an errant ball.

If the variance on these curves is to be trusted, a right-handed pitcher can clean up in full count situations against righty bats if he keeps his pitches about 10 inches off the plate, earning more than a 15% shot at a free strike. This is nothing to shake a stick at, considering that an errant strike in full count situations is worth over 6/10 of a run. 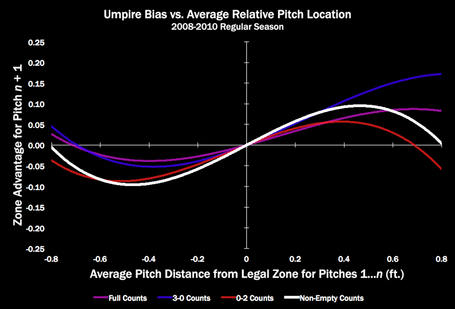 So does the effect hold for different counts? The chart above—plotting the trends for all match-ups in the four different contexts we discussed—indicates that it does. In non-empty counts, full counts, extreme hitters' and extreme pitchers' counts, the same curve exists.

The curve may take a different shape depending on the base-out state, but in every situation pounding the zone costs the pitcher while painting the corners earns him free strikes.

Methodological changes: 1) I kept only regular season pitches in my dataset, as postseason data can be finicky; 2) I omitted all first pitches of an AB, since the average relative position of a non-existent pitch is obviously 0 (or undefined); 3) since handedness (both pitcher and batter) affects the zone, I provided the curves for all pitcher-batter match-ups along with the aggregate trend; 4) I stuck with a third-order polynomial fit with a y-intercept at 0.0 for trends since this more closely models the hypothesized effect.

Previous Episodes in the Benefit of the Doubt series: