Benefit of the Doubt: Mo and the Wide Zone

Share All sharing options for: Benefit of the Doubt: Mo and the Wide Zone 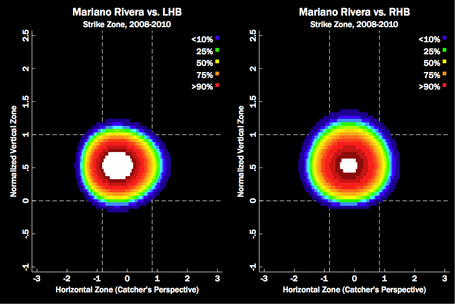 Last week, we looked at the pitchers who cost or saved their teams the most runs via their respective strike zones. This week, I present to you the pitchers whose zones made the biggest difference over approximately 9 innings.

When we calculate the LWD differential for every 75 pitches called (the average number thrown in a 9 inning matchup), we find Wide Zone Mo at the top of the list. In regular season games from 2008-2010, Mariano Rivera's zone (heat map above) has saved the Yankees about 1.61 runs every 9 innings. This works out to about 0.16 runs per outing.

Considering how seldom Rivera allows any runs at all, the runs saved by his strike zone are especially valuable.

On the other end of the scale we find maligned reliever Andrew Miller. His zone (mapped below) cost the Marlins about 0.52 runs per 9. 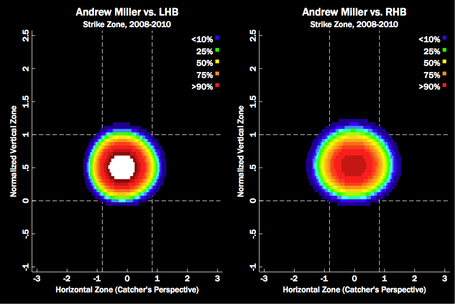 Below is a list of the ten most pitcher- and hitter-friendly zones over the last three seasons based on LWD/75. Same as last week, only pitchers with at least 250 pitches called in each of the previous three seasons qualify.

Felix Hernandez, who brought up the rear in last week's column, has only the 8th worst zone among qualifying pitchers.

In this week's list, I also present standard deviations from the mean (since, when talking rate stats, this actually means something). As you can see above, only three of the best pitcher's zones—and none of the best hitter's zones—fall more than a standard deviation away from the mean. This would imply that the real strike zones for most pitchers (excepting Livan Hernandez, Trevor Hoffman, and Mariano Rivera) are not significantly different from the average zone from 2008-2010.

This is somewhat misleading. As it turns out, the rankings of hitter's and pitcher's zones are somewhat sensitive to the minimum called pitch cutoff. Let's take a look at another list for comparison's sake. In this chart, a pitcher qualifies if he threw 750 called pitches over the last three seasons, regardless of whether he threw a minimum of 250 in any single year.

Under the new criteria, we find a number of new pitchers populating the list. Perhaps most notable is Dustin McGowan, whose LWD/75 of 1.86 is beyond one standard deviation from the mean.

In fact, there's a notable if not earth-shattering year-to-year correlation for the stat: LWD/75 over the 2008-2009 period predicted about 45% of the variance in 2010 LWD/75. So we can say that the stat is a somewhat reliable indicator of what the real zone for any individual pitcher is over the course of a season. This is true even if very few individual zones ever deviate by more than one sigma from the mean.