Dwight Gooden: Remembering What Could Have Been

Share All sharing options for: Dwight Gooden: Remembering What Could Have Been 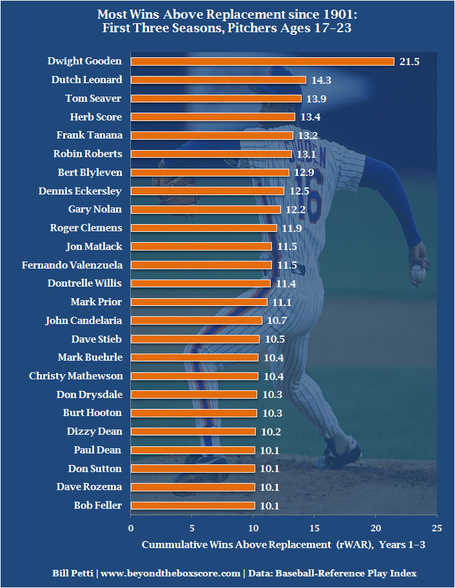 The first year I really started paying attention to baseball was 1985. I was seven years old and living in Northern New Jersey. My father was a Mets fan and my grandfather a Brooklyn Dodgers fan, so when it came to choosing between the two New York ball clubs you could say I was destined to root for blue and orange.

Out of all the players on that Mets team I instantly gravitated to Dwight Gooden, or Doc as he would come to be called. I fought to wear his number 16 for every team I played on and I spent many a waking hour trying to mimic his windup and trademark leg kick.

He was, as the graphic above illustrates, arguably the greatest young pitcher out of the gate we have ever seen. The graphic above shows the top 25 pitchers in terms of rWAR over their first three seasons, age 17-23.

No one else (and that includes a host of Hall of Fame pitchers) comes close to Doc.

I took the list of pitchers above and created a heat map with some key statistics in addition to rWAR over their first three seasons. The darkest green indicates that pitcher had the best statistics for a particular metric, dark red indicates the worst:

Doc dominates, or is near the top, in almost every category.

It's sad to think what could have been with Doc--and I'm certainly not the first person to say this. He had unquestioned talent and proved that he could dominate the very best in the game. Many younger fans outside of the New York metro area don't really appreciate how good Doc truly was. They don't know that he was Stephen Strasburg four years before Strasburg was born. They have no idea about Lord Charles and how many knees he buckled. All they know is that every few years they hear a story about the former pitcher entering rehab or getting arrested yet again.

And that's a shame.