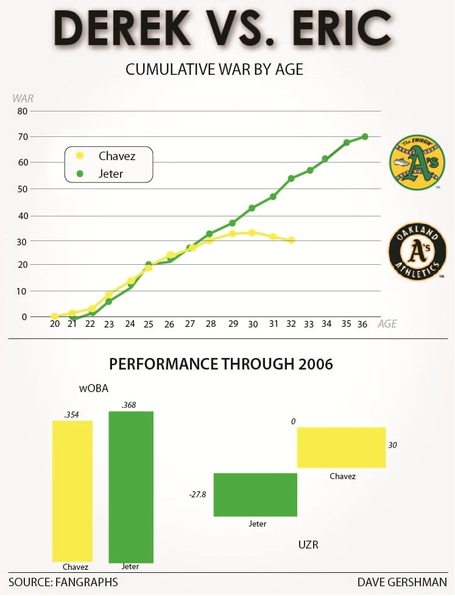 Do you ever think about a certain player, a certain team, or a certain event and think to yourself: "wow, if only he hadn't gotten injured." or, "imagine if that situation hadn't occurred?" There is a good chance that Eric Chavez falls into that category more times than others. Throughout his injury-plagued career, Eric Chavez has gone from being one of the game's elite third-baseman all the way down to contemplating retirement due to back injuries at a very early age. However, a case can be made for Chavez's potential Hall of Fame Career had he stayed healthy.

With a little bit of help from Chris Spurlock, I put this graph together displaying the unfortunate last years of Chavez's career as well as the first nine years of his career which were very similar, if not better than Derek Jeter's first nine or so years. Clearly, had Chavez stayed on the field, that yellow bar on the WAR Graph might even be parallel to Jeter's.

Not just staying on the field and earning his team more wins than others, but Chavez could have been a major impact in a potential 2006-2010 post-season A's team. He could have also been a trade chip had things not gone the way Billy Beane and co. would have imagined.

Still, the interesting career of Eric Chavez continues -- this time, with the Yankees.