Lance vs. Larry: Imitation is Flattery

Share All sharing options for: Lance vs. Larry: Imitation is Flattery

Since crafting my previous graphic analyzing how Lance Berkman's performance at Minute Maid Park would translate to Busch Stadium, I've had a pesky thought stuck in my mind: is Lance Berkman the next Larry Walker? Check out the graphic below, and read the analysis after the jump. 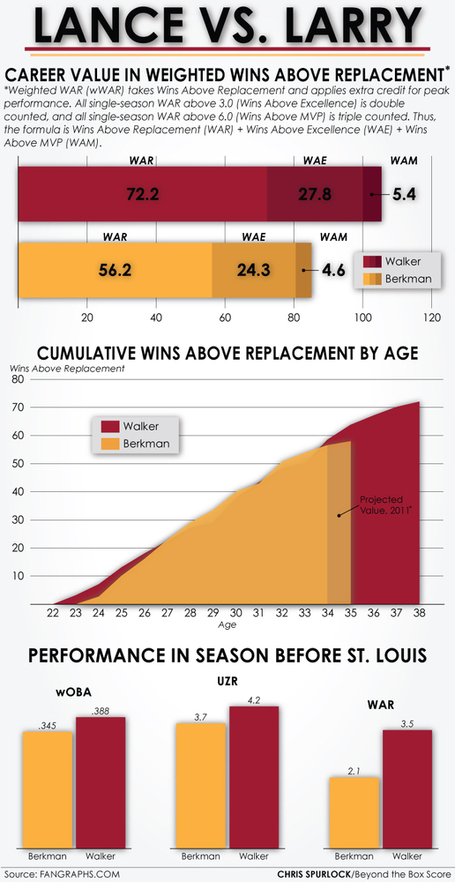 Berkman and Walker came to St. Louis at similar points in their careers. Walker was 37, Berkman is 34. Both had spent long, illustrious careers with one team––Walker in Colorado, Berkman in Houston––and both had recently decreased in value and were let go. Both had power from the left side, played decent defense, and could run a little bit. The Cardinals have a great reputation for finding pitching talent that has fallen by the wayside and rehabbing it (thanks to the magic of Dave Duncan), but they also have a knack for scooping up aging players and energizing them for one last hurrah. They did it with Tino Martinez* Will Clark, they did it with Walker, and they're looking to do it again with Berkman. He only posted a wOBA of .345 last season, but Bill James is projecting a rebound for him at .385. James' WAR projections aren't in yet, but the fans are projecting 2.4 for Berkman this season––up from 2.1 last season––and I wouldn't be surprised if James' numbers came in a bit higher. For what the Cardinals paid for Berkman, they got one hell of a deal if he performs anywhere near his previous seasons, and if he plays as long as Walker did they could get some real value from him.

*It has been brought to my attention that perhaps Tino was a poor example of signing success, and that Will Clark might be a more relevant case. However, while Tino didn't exactly excel statistically––he averaged just 1.5 WAR and 105.5 OPS+ in those two seasons––he brought a certain interesting spark to those 2002 and 2003 teams.

What say you? Am I just hopeful for Berkman's future performance, or did I stumble upon an interesting correlation?

Check out previous player comparison graphs on my blog.