Visualizing the Most and Least Cost Effective Run Creators in 2010

Share All sharing options for: Visualizing the Most and Least Cost Effective Run Creators in 2010 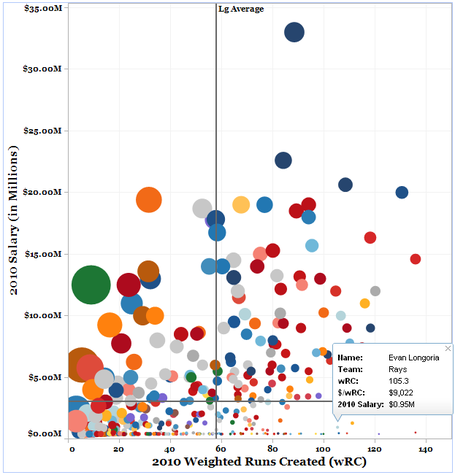 The object of baseball, as we all know, can be boiled down to one simple statement: score more runs than your opponent. Score more runs and you win the game. The larger your run scoring margin over the course of the season, the better your record (thank you Pythagorean expectation). Therefore, when judging the offensive capabilities of a player we rightly focus on how many runs they produce. How do their actions, over the course of the year, lead to creation of runs?

Using weighted runs created (or wRC) I decided to see who where the most and least cost effective run creators in 2010. Who produced the most runs at the cheapest price--or, how much does it cost for each player to create a single run--(and vice versa). The graphic above is a screen shot of an interactive visualization I put together (embedded below the fold at the end of the post), which plots player salary against their total wRC in 2010. The size of the circles is proportional to a player's $/wRC. The data includes 398 players with >= 100 PA's in 2010 (about 70 players were omitted due to incomplete salary data).

Here's what I found:

So a few things stand out right off the bat.

First, the most efficient players tend to be younger guys that are under team control or who have signed team-friendly contracts. The average service time for the top 5 was 3.6 years while the bottom 5 averaged 13.6 years. However, service time wasn't completely driving cost effectiveness--years and $/wRC had a correlation of only .43, so it's important, but so too is the ability of teams to make good deals.

Second, the bottom 5 reflect how much value can be lost when players are signed to large, long-term contracts and don't produce, whether due to aging, injury, or both. The average wRC for the bottom 5 was a whopping 58.52--barely above league average--while the top 5 averaged 113 wRC. Older players are more expensive and actually less productive. The average salary for players with at least 10 years in the league was almost $7M and their average wRC was about 48. Players with 9 years or less averaged less than $2.5M while producing about 50 wRC, further illustrating the importance of identifying young talent.

Who were some of the biggest bargains with at least 10 years of service and >=350 PA's?

Number 6 on that list was Aubrey Huff who produced 112.7 wRC at a cost of only $26,619 per wRC--an absolute steal. Only two players with 10+ years of service time produced more runs (Paul Konerko and Albert Pujols), but they did so at over 3.75x the price per wRC.

What happens if we group players by teams? That's a bit more difficult, as many players played for multiple teams last year. But just for fun I grouped the players and ran the numbers by team: 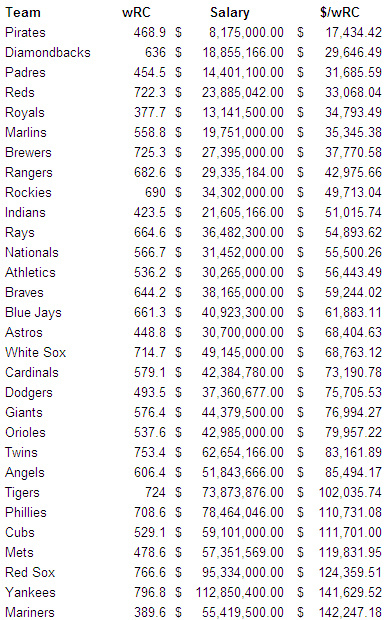 The top 5 includes two contenders (Reds and Padres), while the bottom 5 also contains two contenders (Yankees and Red Sox). Interestingly, the Athletics only finished as the 13th most efficient, but that was largely driven by Eric Chavez. Chavez played in only 33 games and ended with a $/wRC of over $1.4M.

I could go on and on. Feel free to play with the various filters and the data (available here in a Google Doc).