Share All sharing options for: The Worst 30 Home Run Season Of All-Time

A couple days ago I was putting together my 2011 projections for Mark Reynolds; when I ended up with 34 home runs, I decided to look back to see when the last time an Oriole had hit that many bombs in a season (Miguel Tejada had 34 in 2004). While doing that, I ran across the tid-bit that Tony Batista led the O's in homers in both 2002 (31) and 2002 (26) even though he was a pretty bad overall hitter, which immediately made me think that Batista might have the "worst" 30 home run season of all time.

Over to the Baseball-Reference play index I went; and lo and behold, by intuition was correct! Despite hitting 32 home runs in 2004, Batista was credited with -21.5 batting runs - the worst mark ever. He hit an amazing .241/.272/.455 that year in 650 plate appearances, with a .225 BABIP and a 4% walk rate keeping his batting average and OBP down enough that even his relatively impressive power display (he added 30 doubles and a couple triples) couldn't salvage his season. By way of comparison, only 7 major league hitters came in worse than -21.5 batting runs in 2010; Cesar Izturis, Pedro Feliz, Brandon Wood, Brendan Ryan, Ryan Theriot, Alcides Escobar, and Jose Lopez - who combined for a grand total of 28 home runs.

Baseball-Reference actually has 25 players who have been negatives with the bat (compared to average) even while hitting 30+ home runs, and Batista (not surprisingly) makes a second appearance: 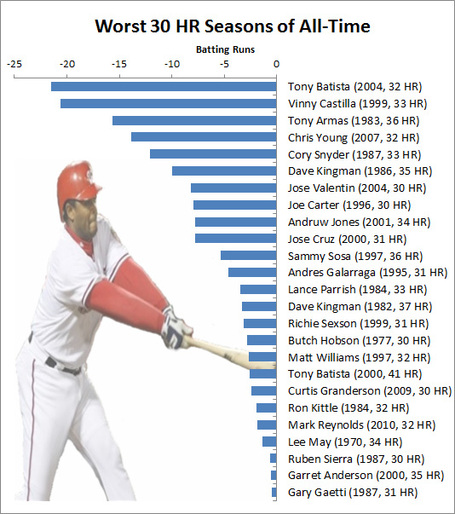