Share All sharing options for: Baseball-Reference's WAR in Plain English 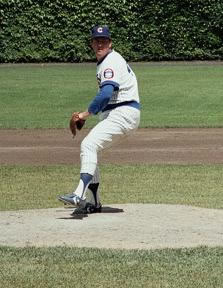 "My Thing" is comparing players across eras to formulate fun historical debates. Because of this, Baseball-Reference's implementation of WAR (commonly known as bWAR, but I still call it rWAR as an homage to creator Sean Smith) has become my go-to metric. Really, it has to be because FanGraphs' implementation (fWAR) of pitcher WAR only goes back to 1974 (for example, a pitcher as recent as Bert Blyleven doesn't have a career fWAR available). And because I can't use FanGraphs' pitcher WAR, I really can't use their position player WAR. You can't mix and match between rWAR and fWAR because they use different replacement levels. So, I just stick with rWAR.

I mean, come on. What's the point to baseball writing if you can't compare Kevin Brown to Jim McCormick?

So, how is Baseball-Reference's WAR calculated? I'm sure somewhere you can get a crazy mathematical formula that will give you the answer. But I'm dumb. I want to see it in plain English. So I ended up writing it. I hope this helps shed some light onto how rWAR is calculated, if you haven't taken the time to find out for yourself already.

Let’s look at both a position player and a pitcher. For a position player, let’s take Alan Trammell, who is something of a darling to stat geeks. The typical analytical baseball fan believes that Alan Trammell should be enshrined in the Hall of Fame. So why do we all feel so strongly for a shortstop who hit .285 with 185 home runs?

Trammell hit .285/.352/.415 for his entire 20-season career. While that may not look overwhelming by today’s standards, it was quite impressive for the 1980s. OPS+, a statistic that measures a player’s On-Base-Plus-Slugging (OPS) against the league average, puts Trammell at 110 (or 10% above the league average). While that also may not sound overwhelming, remember that this is a player who played over 18,000 innings at shortstop, one of the most demanding positions on the diamond. When you take Trammell’s offensive production and park- and era-adjust it (as well as a custom adjustment Smith says is "to ensure that total runs credited to players will equal the actual runs scored for that team"), it comes out to 124 batting runs above average. That puts Trammell's career offensive value in the same region as Cecil Fielder, Richie Sexson, Rusty Greer, or Mike Greenwell. Good hitters, all. But again, not overwhelming. However, we’ve only begun to tap into Trammell.

Trammell stole 236 bases in his career and was caught 109 times. While the caught stealing total is a bit high, he also rates well at taking extra bases in a variety of situations. For this reason, we add 21 more runs above average.

Trammell also tended to induce a lot of errors by the opposition. This likely has a lot to do with him being an excellent base runner. In this skill, he rates as 12 runs above average. For this reason, he also tended to ground into double plays far less often than the average player. In fact, he’s worth 19 runs above average here. Already we’re at 176 runs—just 124 of which were done with the bat.

Now, the glove. Trammell’s defense was worth 76 runs above average. This puts him in the neighborhood of Adam Everett, Tony Kubek, Mike Bordick, and John Valentin. Again, not among the all time greats, but still very, very good. The 76 defensive runs break down to 59 for range and 17 for turning the double play. Once defense is added, Trammell’s now at 252 runs above average.

When you play a full season of shortstop, you get a credit for an additional eight or nine runs per season because the position is much more difficult to fill with a quality player than others. Trammell played the position almost exclusively for 20 years, so that brought his team a ton of value. In fact, this is worth 118 runs. Suddenly Trammell is at 370 runs above average with just 124 coming with the bat.

Runs Above Replacement is then put into a runs-to-wins converter (typically, about ten runs is equal to one win). Trammell comes in at 66.9 WAR. How good is that? 66.9 WAR ranks 72nd all time for position players. He is surrounded by Brooks Robinson, Tony Gwynn, Eddie Murray, and Manny Ramirez.

So why don’t people tend to think of Trammell as a Hall of Famer? Players who are really good at everything—from offense to defense to baserunning, while playing a premium position—have traditionally been underrated.

Pitcher WAR is a bit more of a mystery to us mere mortals. Let’s give it a whirl anyway with Rick Resuchel as our sample. Why Mr. Reuschel? Because now that Bert Blyleven is in the Hall of Fame, Reuschel has the distinction of having the highest career WAR among eligible non-Hall of Famers. That took me by surprise and I'm sure I'm not alone. So, let's see what makes it so.

Stat geeks love pitchers who don’t allow home runs. The FIP (Fielding Independent Pitching) methodology states that pitchers have complete control over just three in-game outcomes—the walk, the strikeout, and the home run. Everything else leaves a pitcher leaning on his defense to get the job done.

The fact is some pitchers play in front of better defenses than others. Over his carer, Reuschel allowed 1494 runs (total runs, not just earned runs). According to WAR, during his career his defense was worth –66 runs. It is much better to use total runs and then give the pitcher back what the defense actually cost him than to use earned runs. A run is only unearned if there is an error involved—and we all know that a fielder can’t make an error on a ball that he’s too slow to even reach.

Running that number through the wins converter brings us to 66.3 WAR, which is an exceptional total. That actually puts him in the Top 30 all time for pitchers. Some things just are not captured in ERA.