Benefit of the Doubt: Pitchers Can and Do Expand the Zone

Share All sharing options for: Benefit of the Doubt: Pitchers Can and Do Expand the Zone 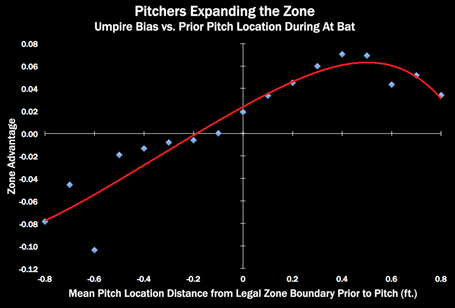 Author's Note: Having discovered some errors in my data, I have revised the chart above and the following article.

In recent weeks, PitchF/X analysts have noted that pitchers who pitch to the corners get the benefit of the doubt. BtB's own Garik demonstrated how Derek Lowe keeps his walk rate down despite pitching way outside the zone. BPro's Mike Fast showed that the strike zone shifts along with pitch location, and that pitchers take advantage of this effect as they age.

My research corroborates these findings, and also shows that this effect accumulates over the course of an at bat.

The chart above plots expected zone advantage (errant strikes - errant balls / called pitches) against the average location of a pitch relative to the nearest strike zone boundary over the course of an at bat. The trend line* indicates that when the pitcher consistently keeps pitches off but close to the plate, his chances of getting a preferential call on the following pitch increase.

*For those who really want to know, the trend line is calculated using a 5th factor polynomial formula.

The sweet spot (not controlling for pitch type, handedness or other factors) seems to be about 0.6 ft. (7.2 in.) 6 inches off the plate. A pitcher who keeps his pitches at that distance from the nearest boundary of the legal strike zone over the course of an at bat will get a free strike every fourteen sixteen called pitches or so.

Conversely, pitchers who pound the zone tend to make things easier for the batter. A pitcher who consistently hits the mark dead center will cost himself a ball for every thirteen called pitches.

This helps explain why pitchers who best paint the corners, such as Mariano Rivera, Livan Hernandez and Derek Lowe, get such a great zone advantage and linear weights differential. It also explains why pitchers who pounds the zone, like Felix Hernandez, do not win the benefit of the doubt.

The evidence is pretty clear that pitchers can, and do, expand the zone.

Previous Episodes in the Benefit of the Doubt series: