Can We Use Bonds' Career WAR Arc to Identify PED Users? In a word, no.

Share All sharing options for: Can We Use Bonds' Career WAR Arc to Identify PED Users? In a word, no. 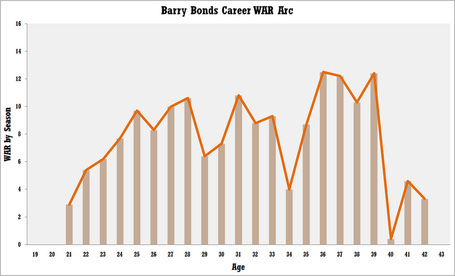 Justin’s post on Gary Sheffield the other day prompted a brief discussion about Barry Bonds and his famous "double peak" arc in the comments section. The question arose whether we could use Bonds’ arc as a method for locating players whose performance was assisted by banned substances. Since there is a preponderance of evidence that Bonds used various steroidal and anabolic substances, can’t we just chalk up his "double peak" to the drugs and look for other players that exhibit the same arc?

It’s not out of the question, but it’s far from a solid methodology for a number of reasons. The first one I’ll address is that, as far as elite players goes, no one has ever exhibited the kind of double peak that Bonds did. Bonds is unique not only because he exhibited a second, sustained peak in performance late in his career, but because that second peak was better than his first.

To find a group of comparable players I used Baseball-Reference’s Play Index to locate players age 34 or older that managed a WAR of >=8 in a given season. As you can imagine, the list was pretty small. There have been only 21 seasons that match that description.

Given that only four players managed more than one 8+ WAR season after age 34 it made the task of comparing arcs pretty easy. I plotted the WAR by age for Bonds, Ruth, Wagner, and Mays. The data confirms that, while some players have gone on to have spectacular seasons after 34, no one has performed like Bonds, making any diagnostic instrument based on his career WAR arc suspect.

(Fair warning--my WAR Arc's are not as pretty as Justin's.) 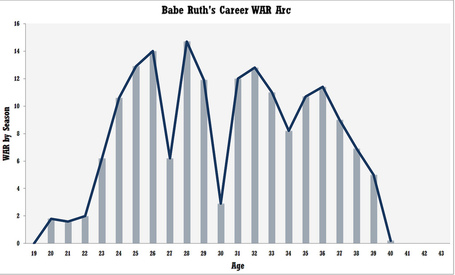 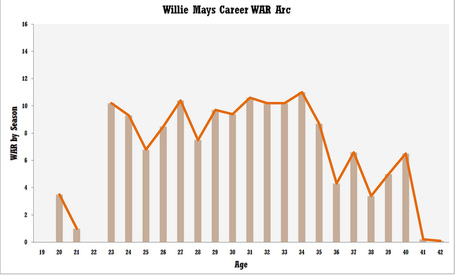 Willie Mays had his best season at age 34, posting a WAR of 11 capping off four straight seasons of 10+ WAR. After his first two seasons (and a year of military service), Mays had his first 10 WAR season at 23 and then averaged 9.5 WAR from 23 to 34 only dropping below 7 once and 8 twice. Mays is odd in that he never really had an observable peak, sustaining excellence straight form 23 to his peak year at age 34. He certainly did not Bonds’ "double peak" arc, as his performance starts to permanently decline after that career year. 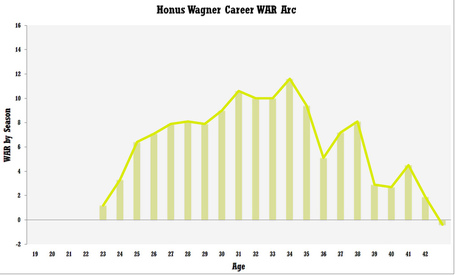 What about everyone’s favorite rare baseball card, Honus Wagner? He was a beast, peaking at age 34 while posting a WAR of 11.6. Looking at Wagner’s arc, however, it looks quite normal—sustained excellence from age 25 to 34 with a steady, productive decline beginning immediately after.

The point of this exercise was to show that Bonds is an outlier, plain and simple. Might we be able to develop a tool to identify PED users? Sure, it’s possible (although riddled with methodological hurdles that I won't list here). But we can’t use Bonds’s arc as a road map, even for elite players.

There simply hasn’t been anyone, PED user or not, like him.