A few weeks ago, I looked at the league-wide leaders and trailers in batted ball FIP, which is an ERA estimator based only on strikeout, walk, and batted ball (ground balls, fly balls, line drives, pop ups) inputs.  Today, I will revisit the topic with a different way of displaying the data.  We can look at which components impact run scoring at what levels - for this, I will use linear weight runs.  The league average is 0 and lower numbers are better for pitchers.  Below are the values I'm using:


Strikeouts and pop-ups are very good for pitchers, walks and line drives are very good for hitters, and grounders and flies are in between with the latter being better on average for hitters (because fly balls will sometimes turn into home runs).  Those components can easily be broken down into an " not in play" set of values and an "in play" set. 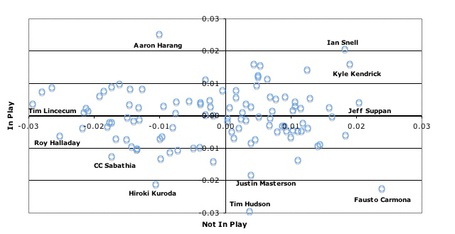 This next list focuses on the best and worst in batted ball profile.

(Wow, 60% of these trailers are guys named Kyle, Kevin, or Scott.)
Something that caught my eye when graphing these data were the players that were good at one thing and less good at the other - the "southeast" and "northwest" quadrant guys.  This next table shows NIP - BIP difference.

To conclude this post, here are your three-year leaders and trailers in expected runs per plate appearance, which yields extremely similar results to bbFIP.

For those who are interested, here is a Google spreadsheet with the data for all pitchers, aggregated from 2008 to 2010.

Data are from Baseball Prospectus.  Run values are courtesy of Dan Brooks.  Also, a thank you to Rich Lederer of The Baseball Analysts for getting me thinking about quadrants.