Is it Better to be an Elite Run Producing or Run Preventing Team?

Share All sharing options for: Is it Better to be an Elite Run Producing or Run Preventing Team? 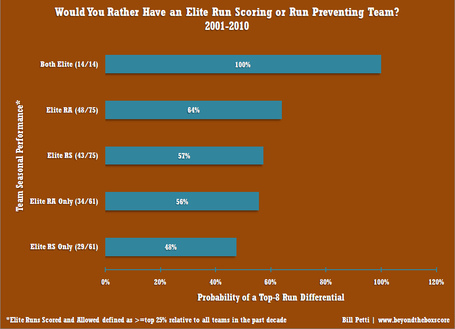 The graphic above shows the probability that a team playing from 2001-2010 would end the season in the top 8 in league run differential based on the various combinations of runs scored and allowed. I define elite as finishing in the top 25th percentile for runs scored (>=805.5 runs) or allowed (<=698.75 runs) based on all teams over the past decade. Numbers in parentheses represent the number of times that category occurred and the number of times that category finished in the top 8.

(Why the top 8? Because, generally, this captures the four best teams from each league and the eight playoff teams in a given season. Teams that finished in the top 8 made the playoffs 78% of the time.)

So while the past decade was undoubtedly an offensive era, when teams managed to put together elite pitching and defensive clubs they had a greater chance of finishing with an elite run differential than teams that simply built elite slugging teams.

Think about 2010. Many prognosticators argued that the Giants were lucky to make it past the Phillies and win the World Series against the Rangers. Upon closer examination, this makes no sense.

The Giants scored only 697 runs all season, but they only allowed 583--for those counting at home, that's a run differential of 114. That differential was good for 4th in all of baseball and an expected record of 95-67. The Phillies, by contrast, scored 772 runs and allowed 640. They were expected to win 96--only one more than the Giants. As for the Rangers, they scored 787 runs and allowed 687, good for the eighth best run differential in the majors. They were expected to win 92 games, four fewer than the Giants. All three teams had what could be considered elite pitching staffs, but the Giants had the best of the three.