The Value of Defense: Jeff Kent and His Hatred of the Leather

Share All sharing options for: The Value of Defense: Jeff Kent and His Hatred of the Leather 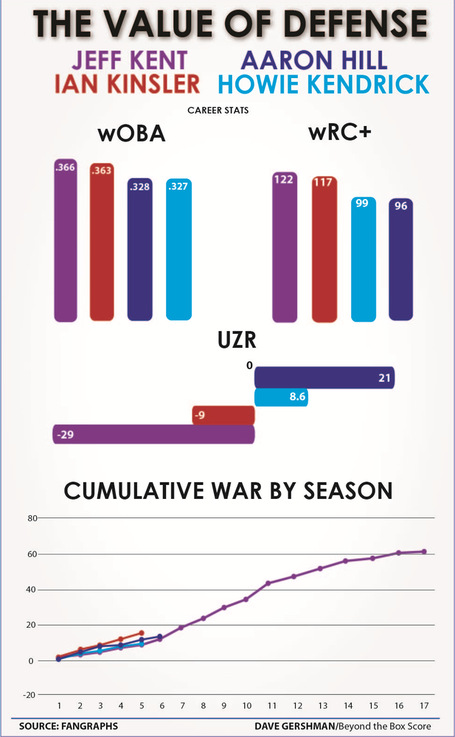 I'm sure you're wondering the same thing I was as I was creating this graph -- "where can I find a bowl and spoon to eat up these delicious fruity pebbles?" Well forget about the fruity pebbles, let's talk some baseball...

I was contemplating whether or not Jeff Kent was the most overrated underrated player of all time. It seems to me that someone who has Jeff Kent as a "lock" for the Hall of Fame, which some do, is overdoing it just a tad. In my eyes, despite being a power hitting second baseman, despite playing for some good Giants teams, despite winning an MVP award, Jeff Kent isn't destined for Cooperstown as much as some would think. Why you ask?

In light of Rickie Weeks' new deal, I did some homework and compared Rickie to every second baseman in the NL. Then, to expand my search, I compared many different second baseman in baseball to players past, concluding that the game currently boasts of many underrated second baseman or a few who simply had mysterious careers, such as Luis Castillo. Castillo enjoyed a decent 7-8 years before tailing off for what has been a dreadful past 2-4 years as a big leaguer.

But as I was comparing second baseman past and present, I realized that the difference in many overrated and underrated second baseman is defense. Imagine if Jeff Kent had at the very least, a close to positive career UZR -- then we're talking about whether or not Kent was better than Sandberg.

As the three current second baseman have all been worth more wins than Jeff Kent thus far in their career, you just wonder how that can be possible? Kent is superior in nearly every offensive statistic. Kent had more power. Kent batted around Barry Bonds for quite some time. His defense throughout all of his career was pretty lousy, especially compared to other 2B's.

Furthermore, it's amazing that a career can be so different due to a horrible career's worth of shotty D. The defense made him much less valuable than the other three, who supplied a bit of both. Even though he eventually stepped it up and provided to be worth more wins during his 8th-14th years and beyond, one can only imagine what he would have been like had the glove been a bit more special. Nevertheless, killing two birds with one stone, let's see in 10 or so years if Howie Kendrick, Ian Kinsler, and Aaron Hill are comparables to Jeff Kent and what many think, is a potential Hall of Fame career.

Now back to the fruity pebbles...