Benefit of the Doubt: A Tale of Two Hernandezes

Share All sharing options for: Benefit of the Doubt: A Tale of Two Hernandezes 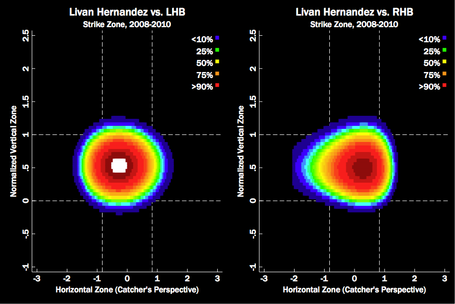 So we all know that veteran RHP Livan Hernandez gets the benefit of the doubt when it comes to balls and called strikes. At the very least, those of you who follow this column or watched Game 5 of the 1997 NLCS know this. He gets the pitches outside against LHB and he gets the pitches way inside against RHB (see heat maps above).

On the other side of the strike zone spectrum we find Felix Hernandez. As you can see below, his strike zone is far tighter than Livan's. King Felix does not get the benefit of the doubt. 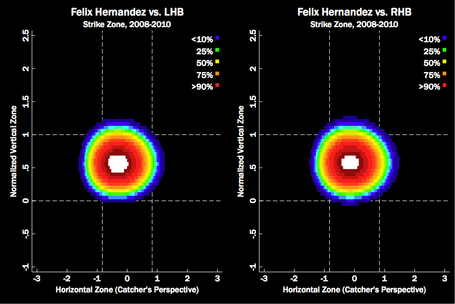 Heavy hangs the head that wears the crown.

But how much of an effect to pitchers' personal zones have on the actual game? In order to answer this question, we have to apply a run value to every miscalled ball or strike. 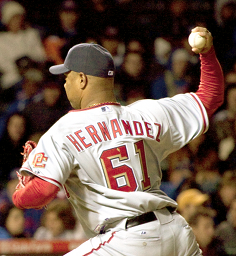 For every count, we can expect certain number of runs to score between the moment of the pitch and the end of the inning. Saberists call these run expectancies "linear weights." As one would expect, the linear weights are heavier in hitters' counts and lighter in pitchers' counts.

Several analysts--including but not limited to Tom Tango, Mike Fast, Phil Birnbaum, Joe Sheehan, John Walsh, Jeremy Greenhouse, Harry Pavlidis and Craig Burley--have crunched the numbers. We'll be using Tom Tango's, in part because his sample is the largest and presumably most stable, but also because I've used his numbers in my earlier work on the relationship between run expectancy and zone advantage.

Note that the effect of a blown call is far greater for a full count than an empty one. Note also that these numbers apply to the average game state: they do not account for outs, bases occupied, inning or run differential.

So now we know that not all blown calls are equal. By adding up all these LW credits and debits, we can now establish a run value for every pitcher's individual zone. The chart below presents the top ten aggregate LWD leaders over the last three regular seasons, followed by the bottom ten laggards.

Sample note: Only pitchers who threw at least 250 called pitches in each of the last three seasons qualified for this list. 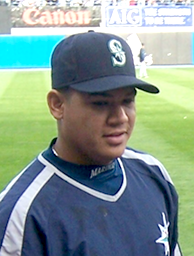 *That said, we cannot just assume 9.1 runs per win (the average game run environment from 2008-2010), because run expectancy does always translate directly into win expectancy. This is especially true for relievers, which we'll spotlight in next week's episode. No matter, as those of you following the Mariners or the Nationals in recent years probably haven't noticed anyway.

You may have noticed that Mariano Rivera is the only reliever to make his home in the LWD Top 10. You may also have noticed that Mo's thrown about 1/3 as many called pitches as his peers. That should tell you something about who will lead all pitchers when we look at standardized LWD (LWD/150 pitches) (LWD/75 pitches), next week.