Gary Sheffield: Forwards and Back. (A Visual Case for the HoF)

Share All sharing options for: Gary Sheffield: Forwards and Back. (A Visual Case for the HoF) 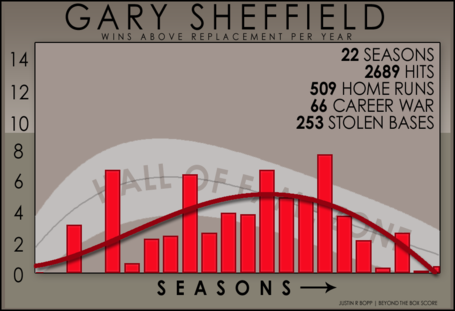 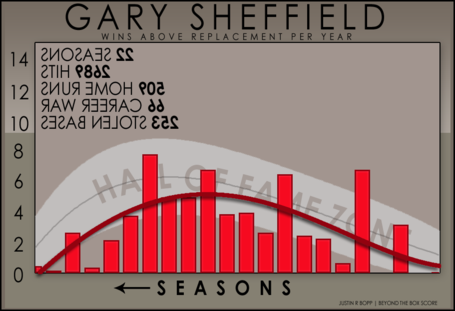 ...I decided to take the same set of players and find another Hall of Fame Zone--the Hall of Fame Career WAR Arc. I took every player and arranged his career WAR numbers (via Fangraphs) from his first season to his last. I found that the average Hall of Famer has a 20.5-year career. That surprised me a bit.

With the career-aligned data in place, from each of their rookie seasons to their sad departure from the majors some 20 years later, I averaged every year's WAR data. Obvious note: while almost every hall of famer starts with a modest 1.0-ish WAR, they adjust very quickly, up into the 5s and 6s in just three years. Even if you've been following sabermetrics for some time, you might still be surprised to note that the average hall of famer peaks in his 7th season--somewhere between 26 and 28 years old.